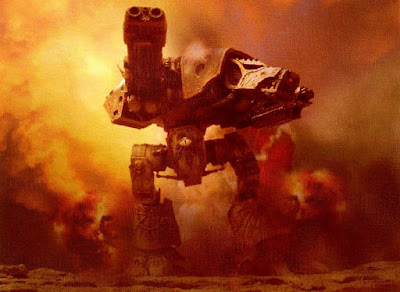 A plastic 28mm Warhound Titan? It seems additional rumor bits are saying yes from reliable people. When?, sometime this fall. Here is the latest...

Squiggly has clarified the following
Nononono the boxed game doesn't contain a Warhound. That's a separate thing, it's one of a few big kits that are in the early stages of product development atm.

via Squiggly on Faeit 212
- New Assault squad yup, doubles as a Despoiler kit.

- Breachers? I know they were developing Mk3 armour, I hadn't heard anything on this front in a while but it makes sense.

-Next boxed game is certainly similar to Calth, similar but not the same. It's not a Calth sequel by any means. Should drop Fall time. I still think we'll see the general release of th e Calth stuff this month, but I could well be wrong.

- New Admech book. I posted about this way back, I think it's meant to come out fairly soon due to the FW book. New robot, check. It'll be fairly "Colossus" and should help you "Conquer" a few worlds.

- And just because I love you all. 12 Horus Heresy books this year. Yes tell, about half will be reprint anthologies, but still 6 brand new Heresy books in one year.

Also via a reader on Faeit 212
Have also heard about the new plasic workings from the horses mouth, but
not about any plans for fw titans.


All of this is in response to the following rumor that we had yesterday.
via Ishagu on Bolter and Chainsword
Chapter Name: Ultramarines
A new HH box, similar to BAC:
-Forge Lord
-Assault Marines
-Breachers
-Tartaros Terminators
-Deredeo Dread (this surprised me!)


Also there might be an additional HQ character in the next BaC style box, but I can't quite remember, my head was spinning lol