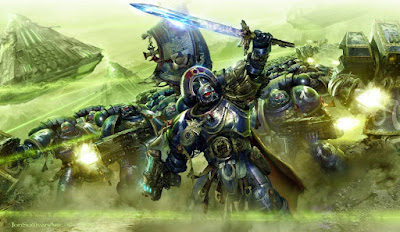 A couple days ago we had a source send us in information that a new edition of 40k is coming, Well, according to the latest information from Sad Panda its not coming until 2017. Also we had no mention of it from Squiggly either in his list of releases coming.


While a new edition of 40k is needed at this point (Sad Panda referring to it as a Lame Duck rule set), it appears that we will be waiting for it a bit longer.

here is also a link to Squiggly's release list.

Always remember that we are talking rumors here.

via Sad Panda on Dakka
New edition won't arrive in 2016.
But they will (and kinda already do) move the story forward.

There is a new edition of 40K in the works.
It's also correct that GW doesn't bother re-doing old Codex books, basically since Tau, as they consider 7th a lame duck rule set (there will still be rules for new miniatures, incl. campaigns, Codex Deathwatch, etc..).

Just that the timeline is off and the new edition further away ... at least 2017 ... according to my information (which has been good so far, but a new edition of 40K is the most secretive topic you could find in GW).
5/18/2016
Natfka
40k, 7th Edition, Gaming News, News Headlines, Rumors, Warhammer 40k