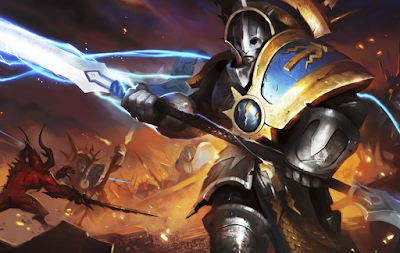 Lots here for Age of Sigmar fans, including information from the Generals Handbook (which is widely anticipated for the game), and future model releases.

via sources on War of Sigmar
https://war-of-sigmar.herokuapp.com/bloggings/784
We got this by a friendly raven
Use Salt of course !!

general's handbook
-units have a model count cap (max 10 models, or 20 models, etc. depends on the unit)
-you can only add models in "groups" (no points for individual models. example: add 5 liberators to your unit for X points)
-book will contain points for all models, and they'll be included in battletomes going forward (i don't know if it's definitive, i couldn't tell if he assumed that was what's going to happen or if he was told by studio guys)
-army organization is a mix of force org from 40k and the point-tiers from fantasy. for every X points in a game, you can have up to Y heros/wizards/monsters, etc.
-in Match Play, there's the "Rule of 1s", in that 1s always fail, limit named characters to 1 per army, and units you summoned cannot summon other units that turn
-weapon upgrades in units won't cost additional points.
-some missions in the book that are styled like LotR games, where you recreate a major battle with each player bringing an army determined by the rules, and such missions will be included in battletomes.
-narrative will have a lot of cool stuff to add to your games. magic items for your heroes to wield, new Path of Glory for all armies, new missions to run, etc.

future models
-in the general's handbook, there looks to be new sylvaneth models shown. i would take this with a grain of salt, as they could be very well done conversions, but from what i heard, there are models of aelfs whose limbs are turning into branches and plants, and new updated treemen (not treelords, the treemen who are bigger than branchwraiths but smaller than treelords)
-concept art shown of allariel riding what looks to be a giant rhino beetle? sounds interesting, possible future model? only time will tell
-Slaanesh is not dead. Models are supposedly finished and they're waiting to get things ready (box art, artwork for future books, production, finding a time to include in the story, etc.) studios rarely release models the second they are done, there's a lot of prep work behind the scenes.

sales numbers
-. AoS is now roughly 30% of sales. 40k is still outperforming by a large margin, but AoS numbers are healthy. what to take away from this is that AoS will continue forward, it's here to stay, there's no plans to go backwards on it.
5/12/2016
Natfka
Age of Sigmar, Gaming News, News Headlines, Rumors