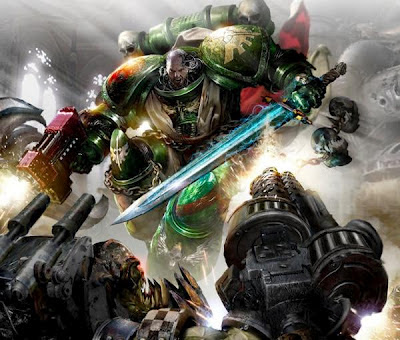 The Dark Angels are just right around the corner now, and with the new White Dwarf being released already in some countries (notably Denmark.... lucky souls), we are now able to gleam a little bit more information on just what we are going to be seeing.


This bit is also from Lars, who gave us a first inside look at the January White Dwarf yesterday (he has the White Dwarf in his hands). If you missed it, don't worry, here is the link. http://natfka.blogspot.com/2012/12/dark-angels-units-details-from-wd.html#more

via Lars Emil of Denmark, from the Faeit 212 inbox
More tid bits from WD of note:

- In the battle report, the DA scouts are listed under Troops, so it looks like they have finally been moved to that section
- the DW terminators are still listed as Elite, so if the rumour that you don't need Belial to field a DW army is true, there must be another way of doing it (e.g. selecting a Comp. Master in TDA or something - there is (as far as I can tell from the small picture) no rule to make them Troops under their own entry.
- RW Knights and Sammael have the Skilled Rider USR
- DW Knight Champion (called Knight Master) is mentioned as wielding "the flail of the Unforgiven" (no rules sited), considering the name, perhaps it has special rules.
- in the battle report Adam Troke (playing DA) selects Flakk missiles for his tactical marine missile launcher, so it's not only Devastators, who can take that upgrade.
- LS Vengeance is listed as a Heavy Support entry.
- RW still have homing beacons.
- and in response to a comment I read: Yes, DA of course still has normal Land Speeders.


-In the battle report Adam's librarian I TDA has two mastery levels, so apparently you can buy more than the one.
-And his Chaplain is an HQ entry, so apparently no 3 for 1 Elite choice like the rumours said
- And the Dark Talon has hover mode