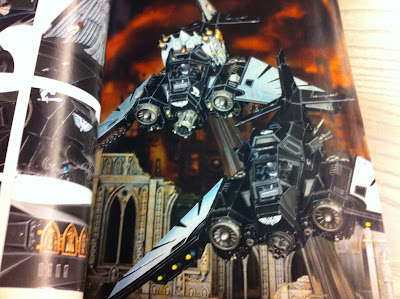 Apparently the new White Dwarf is not a leak, but is out in Denmark at stores. Amazing really. However, because of that, we have some details given to us via the comment section that help gives us an idea on what these new units are going to be and what they do.

A huge thanks to Lars Emil for getting this down for us. He spent the time to sit down and gleam a little bit from each of the units.

via the Faeit 212 comment sections: from Lars Emil
Just in reference to the title of this post: No, it's not actually a leak, the WD is just out in Denmark...for some odd reason. I picked up my own copy yesterady at a local kiosk.

Tid bits of note in the WD:
Dark Talon: Rift cannnon (no rules sited), hurricane bolters and stasis bomb (one use only, dropped on an enemy for - 3 WS and - 3 I)

Niphilim fighter: heavy bolters, blacksword missiles (no rules sited, but the battle report later in the issue mentions that the fighter is supposed to be good at taking on enemy flyers, so I guess the missiles are for that), avenger mega bolter/lascannon.

Deathwing Command: multiple options incl. apothecary and standard bearer. A "Champion" wielding the "massive halberd of Caliban" is mentioned and there's a picture (no rules sited).

Deathwing Knights: Terminators with WS5, Storm Shields, power mauls and special rules, incl. Hammer of
Wrath and "Smite" which makes them strike at S10 AP2 for one round. BTW both DW terminators and the knights can be fielded in units of 10 now! Oh and the DW can take plasma cannon and they have USR "split fire"!!!!

Darkshroud: HB/AC, Shrouded USR and conferes Stealth to allies within 12", and it has a rule that gives units +1 to charge distance (as far as I can read - the picture is quite small and hard to read, so perhaps it's plus 1 to something else).

RW Black Knights: plasma talons (instead of bolters, no rules sited, and not being called twin-linked plasma gun/pistols leads me to believe the rules could be a bit different), corvus hammer (no rules sited, but I guess they are power mauls), they also have the option of a RW grenade launcher.

Sammael: pretty much the same as before, as far as I can tell, though with a 4+ inv.save (which is confered to the land speeder if he chooses that instead) - can't remember if that's new.

DW knights and black knights have a rule called "Inner Circle" and in the battlereport it is mentioned as giving them some form of re-roll in close combat.

DW assault rule is mentioned in the battle report as ensuring a DS in turns 1 or 2 with no dice roll needed, decided by the DA player before the game begins.

This was what I could decern, but there are probably loads more if you really study the WD.

I feel with you guys "over there" who have to wait until the 5th of January for your copy of WD, so I hope my little run down will at least give you something over the holidays.

...and happy holidays once you get to it.