Presence of Faeit: What We Would Not Give for an exciting 40k Release 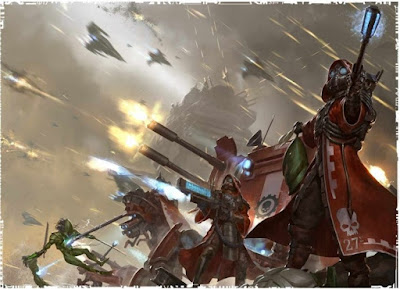 I know Warhammer 40k is not the focus right now coming out of Games Workshop, its Kill Team and Age of Sigmar soon to be followed by Adeptus Titanicus. It does seem that the creativity of the GW design team has been so focused on the Age of Sigmar and the release of other games that we have been lacking any real design into put into Warhammer 40k.

Please remember that Presence of Faeit articles are editorials full of opinion and the occasional thought. Its just been awhile since Ive done one.


Now I know that we have had the recent Imperial Knight releases and so on, but look at the Nighthaunts. Well designed detailed miniatures with a lot of creative work being poured into them. A lot of our 40k releases since the new edition has been either snap fit miniatures (which I also like, especially for my son) or updating codices for the current edition of 40k (which has felt rather lackluster after we have gotten used to seeing nothing really new and exciting coming out alongside most of them).

Now of course it does not have to be Sisters of Battle level of release that I am looking for, or even an Adeptus Mechanicus level, but seems forever since we have seen anything near that for a long time. The list of outdated miniatures is immense right now, and in some places downright embarrassing....

There is just so much that would be incredible to see, like updated Imperial Guard regiment miniatures... Eldar, and many others.

I am looking forward to the rumors we have been hearing that Orks may bring something new cool and exciting, but I am also hesitant. Orks are immensely popular (at least here on this site they are), and I would love to see some new units and a re-sculpts of some of the current miniatures line.

While I am not currently doing tournament these days (when I was doing events, every outdated book always seemed to kill me with impatience, as it was always my armies lagging behind), the concepts of only releasing an updated book with nothing else has seemed a little harsh and become rather lackluster.

Even a small vehicle upgrade kit specific or unique to 8th edition vehicles for each faction or a special 8th edition leader type would of been awesome through this whole process.

I have lots of hope that we continue forward and get to see some really good updates in the near future to all the different factions, but I hope that instead of all the smaller games coming so fast that 40k gets a little more with codex releases.

I believe my biggest fear is that we will see the final codex updates, followed by something cool, and then an edition update next summer followed by another many months of just codex updates.


I do love how things are going, but just feel that 40k is on the back burner sometimes, which is by far my favorite game.
7/22/2018
Natfka
Presence of Faeit, Warhammer 40k