Graham McNeill As Me Anything Forum Coming 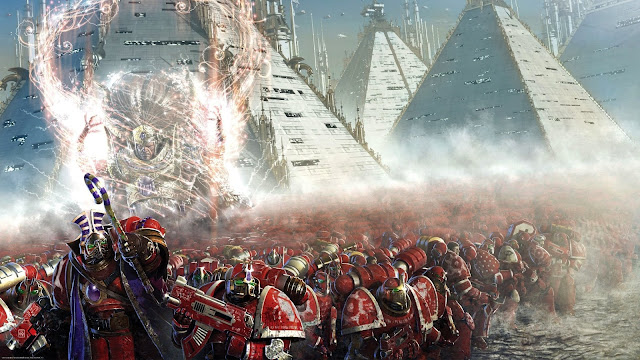 Graham McNeill will be doing an AMA (Ask me anything) question and answer session this coming Friday. Graham is a reknown for his work through the Black Library and was on the GW Design Team. A great person to get the straight talk from, so this will be worth checking out.

Hi Guys,
Just wanted to let you all know that the we in the new modteam at /r/warhammer have organised another AMA for the end of the month!

Who?
You know, Graham bloody McNeill! One of GW's lead authors for over a decade. Formerly of the GW design team. Ultramarine Omnibus? Galaxy in Flames? STORM OF IRON

When?
Friday, the 27th July at 8pm GMT. That's 4pm Eastern and other times that cleverer people know.

What?
An AMA! Ask me anything. Not me though. You'll be able to put any question to Graham.

Why?
Ever since Gav Thorpe started this journey, we've been reaching higher and higher to bring you better and better AMAs. I'm worried we've reached the peak now! Graham has unprecedented insight into the Lore of the Games Workshop universes.

What do you want from me?
Firstly, start thinking of questions. Don't worry about posting them here, as the AMA itself will have a new post. We will be accepting any and all questions, they don't have to just be about his work on GW games.

Secondly, we'd love some suggestions of people in the hobby that you'd like to see do an AMA.

Some blurb about Graham
Graham joined Games Workshop’s Games Development team in the year 2000, where he worked on projects such as the Tau, Necrons, Witch Hunters, Space Marines and Black Templars codexes for Warhammer 40,000, Conquest of the New World and The Empire for Warhammer, and The Two Towers for The Lord of the Rings. As well as all this, he was involved in running Design Studio campaigns and collecting the odd toy soldier. Between populating the various Warhammer universes with fiends and heroes, he wrote over fifty short stories, and thirty novels for theBlack Library and a number of other publishers.

Graham left Games Workshop in the summer of 2006 and spent the next nine years working as a full-time freelancer, spending most of his days locked in a tiny office (or tea shoppe) and dreaming up new and interesting ways to put his characters through hell on the pages of his novels, short stories and background books. Since leaving Games Workshop, he’s ventured far and wide, continuing to cause havoc in the worlds of Warhammer as well as those of Blizzard entertainment’s Starcraft universe and travelling back in time to the 1920s to unleash eldritch horror in a trilogy of books set in the Lovecraftian vein of terror that is Arkham Horror.

His Horus Heresy novel, A Thousand Sons, was a New York Times bestseller, and Empire, the second novel in the Sigmar trilogy, won the 2010 David Gemmell Legend Award for best fantasy novel.

Graham left the rain-swept shores of fair Britannia in the summer of 2015 to take gainful employment with a promising band of plucky video game entrepreneurs named Riot Games in Los Angeles, working as a Senior Writer in the cut and thrust of the Narrative Discipline, where he remains to this day…