The Hunt is on.... the next Loyalist Primarch revealed and much more. 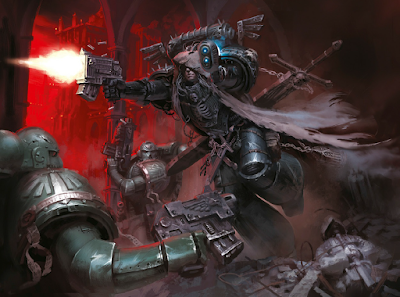 The Hunt is on.... the next Loyalist Primarch revealed and much more. This looks awesome, and I can't wait to get more details down the road and delve into one of my favorite villains... Cypher!


This is from a very reliable source of information.

via anonymous sources on Faeit 212
info about another two part series coming next year.

It follows on from Warzone Fenris and focusses on the Dark Angels and their Successors going on a crusade post Fenris Cataclysm..

They received a summons from the High Lords if Terra to get to Cadia (as did the Wolves and almost everybody else!) However, something else has caught their attention and they must intercept it fast.. although the dilemma is.. if they don't get to Cadia, it will look very suspect and could cost the Imperial dearly in their defence.. but I'd they don't intercept this 'thing/person/army' (can't say!!) then it could also, equally spell doom for the Angels and the Imperium.. or so they think.. who knows? ;)

It's leading into a race to Terra for the 13th Crusade.

It also features a loyalist Primarch returning, you guessed it, The Lion.. and everybody's favourite Hide and Seek champion Zahariel.. I mean Cypher!!