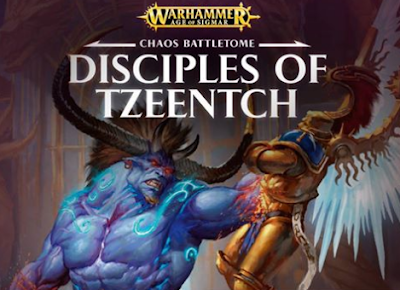 The Disciples of Tzeentch had a massive preview very early this morning. So if you are in the US, you had to be up at 5am to catch it. Here is what was revealed

Now I did my own highlight section, but tbh.... Lady Atia's was much better. So this is her notes, and some of my own pics 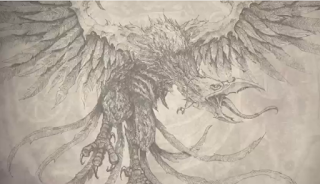 The guys wanted to make certain that this pic was used for screenshots this time around, and for being cool enough to do this, here it is. 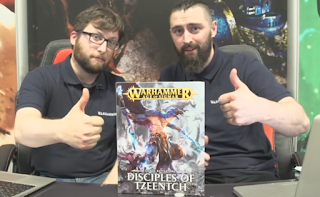 Just a Heads up as well.....
Massive AoS Coming Campaign in February


You can see Lady Atia's rundown here on the War of Sigmar
https://war-of-sigmar.herokuapp.com/bloggings/1529

- Intro video - it's the time of tzeentch now, the architect of fate rises!
- Mug, Rob and Eddie are here :)

- DoT is a new AoS battletome. They will also give an overview of where they are at AoS, both story and rules wise!
- This battletome moves the story along a bit.
- Where are we in the mortal realms right now? We only saw three realms so far, we know that the forces of chaos rose and drove back the forces of Order and Destruction in the Age of Myth, they overthrew the pantheon of gods. Sigmar build an army to reclaim the mortal realms one day. With the Age of Sigmar he threw down his Stormcast Eternals. Wars in Realm of Fire, Life (-> Sylvaneth), Beasts. Nurgle and Khorne's forces are driven back, they both had big footholds there, but their powers are now declining. Alarielle got reborn in her War-Aspect.
- It's now Tzeentch's time to try to claim to be the head of the chaos pantheon.
- Forces of Order have now bases in some of the realms, re-populations begin. New cities!

- Season of War campaign - some of this elements are now incorporated in the narrative of the ongoing world/story line. Basically - this book is your fault ;)
- There are already agents of tzeentch out there in the cities. Tzeentch is playing the big game with style. He is trying to get dominance over the other chaos gods - Sigmar is secondary.

- 2016 was an awesome year for gamers of AoS - both competitive and narrative games. AoS is doing great!

- Not only new human population - also new beasts population.
- DoT is not only about the Arcanites, it's an evolution of the classic battletome. Created with feedback from the community.
- The Tzeentch book covers ALL OF TZEENTCH. If you got Tzeentch, this is for you.
- It's got lots of stuff. Like tzeentch daemons, tzaangors, arcanites, tzeentch mortal army (chaos warriors, slaves to darkness). Huge amount of models. Some new ones, some old ones. Ogroid Thaumaturg is in ;)

- There are still human kingdoms who survived the Age of Chaos. Scattered remnants of tribes that once where great kingdoms, a few may have found ways to hide from Chaos. Also people are moving back in and build new cities - tzeentch already has spread his seed though ...
- Years happened between the last book and this one! Enough time to build a city.

- New Path to Glory. If you are playing narrative, for the first time they have included the PtG for that army!
- Full spectrum of building a Tzeentch Army!

- New tzeentch dice rolling mechanic for your army^^
- You can't change the dice, but choose to use one of your tzeentchy dice instead (you get nine at the start of the game).
- In order to get this, you must be playing an army of Tzeentch! (of course ^^). Any, as long as it's tzeentch (daemons, arcanites, or a mix!)

- Expand your collection, use your collection or get a new one - or a mix!
- New Command traits for different sub-factions. Three charts. Arcanites, Daemons and Mortals.
- Arcanites are sneaky. Mortals are more the "traditional" chaos army.

- New Lore of Fate - the ones for Arcanites and mortals.
- More spells! Also, the Lore of Change. It's for daemons.
- Two very different ways, you can also mix them.
- Gaunt Summoner - keyword daemon, mortal and arcanite. So he can pick from both lores! Lvl 2, also has his own spell. He's gonna be great!

- New narrative warscroll batallions (similiar to the Sylvaneth ones).

- Points are in the book. 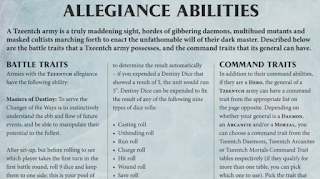 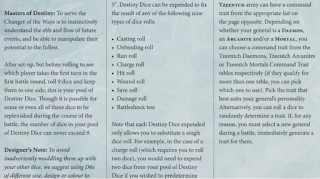 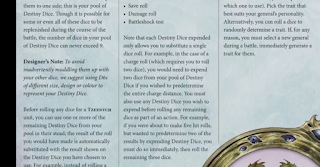 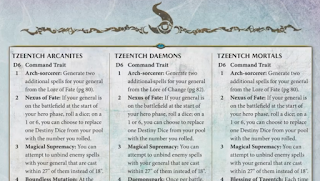 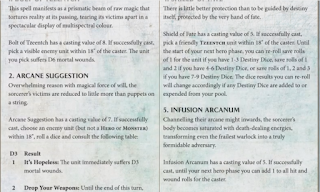 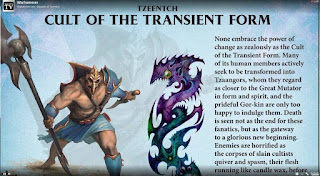 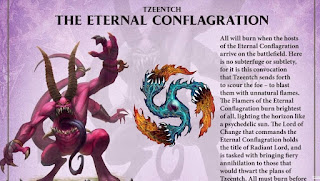 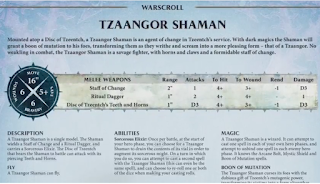 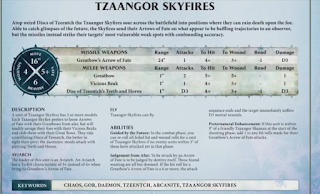 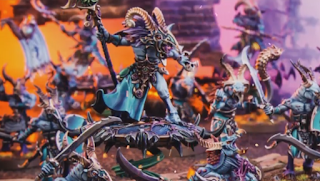 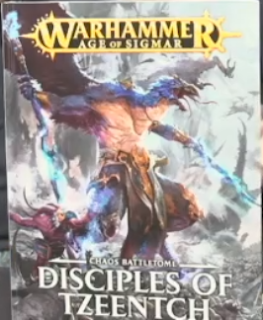