Rumors: The Return of Saint Celestine 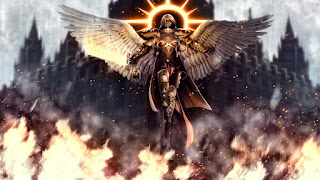 Sisters of Battle are still a huge area of contention even with this current Imperial Agents codex release. There is a huge online demand for them, and we have heard many different responses, especially regarding plastic sisters. If there was absolutely no plan to return to them in the near future, it would definitely spell out doom to our hopes of seeing a new Adepta Sororitas codex in 2017.

A long time source here chiming in that he has seen the models, conflicts with the talk of plastic sisters in the Magnus reveal being a joke (although not a good one if it was). So any mention of a future release including models for Sisters of Battle is worth mentioning, and with Imperial Agents not including St Celestine in the book this is of great interest.

Again, these are rumors.

via Whisky Priest on Faeit 212
The rumours coming out of GWHQ suggest that Celestine will be back next year in a forthcoming Black Crusade plotbook - the same kind of thing that has seen the reappearance of Magnus, and potentially other primarchs