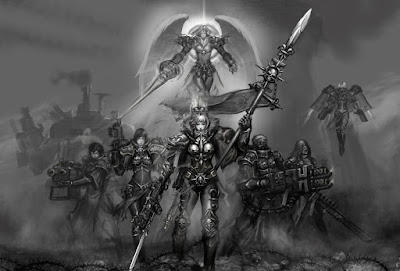 All the details are coming out now for the new codex Imperial Agents. There are some big changes, like St. Celestine being removed. Check out the latest, and there is a link put up by GoonBandito that has the pics.


Codex in hand, ask away. Things I can quickly confirm:
Canonness Veridyan has a dataslate with rules. She gives out a Precision Shot/Precision Strike bubble to Adepta Sororitas units within 12". Otherwise same as a regular Canoness, but comes with a Power Sword, and she costs 85pts. My first thought - sit her near a unit of Retributors for pseudo-Snipers (ie Rending Heavy Bolters with Precision Shots). Incidentally, the cast on my model looks good - only a very minor bubble on the back of the cloak where you'll never see it. It's also got a 2016 copyright for those interested.

All the armies in the book are their own Factions, with all the implications that carries. The Valkyrie in particular is listed as-is from the Astra Militarum codex (with Faction: Aeronautica Imperialis instead). BUT, Acolytes *can* take a Valkyrie as a Dedicated Transport (as well as Battle Sister Rhinos and Grey Knight Land Raiders). Games Workshop just borked their own FAQ as far as I can tell :s

The Canoness still has the Eviscerator and Inferno Pistols as a wargear option on her dataslate for those who were worried.

The Exorcist Missile Launcher is specifically ruled as a Turret Mounted weapon with 360-degree arc of sight.

Warlord Traits/Relics are unchanged for both Sororitas and Inquisition

Acolytes are 3-9 Acolytes with same statline and upgrade options as before (though Carapace and Power Armour got cut in cost by half). Additionally, any Acolyte can be upgraded to a Mystic with the same No Deep Strike Scatter rule as before. The unit can take Chimeras, Soroitas Rhinos, Land Raiders of all 3 types and Valkyries as Dedicated Transports.

Demonhosts are a unit of 1 - and now have the actual Demon rule too! - but are otherwise unchanged.

Jokearo are a unit of 1, and are unchanged.

Psychotroke and Rad Grenades are unchanged.

Edit: So after looking through the Adepta Sororitas and Inquisition lists, here are the changes I can see from the e-dexs. If I didn't mention it, it didn't change as far as I can see.


New unit: Arco-flagellants (Elite). 3 Arco-Flagellants for 30pts, can buy up to 7 more. Rhino or Immolator as DT.

New unit: Crusaders (Elite). 2 Crusaders for 30pts, can buy up to 8 more. Rhino or Immolator as DT


New detachment: Ministorum Delegation. 1 HQ (must be a Ministorum Priest) and 1 optional Elite, all units in the detachment gain Shield of Faith.

New formation: Ecclisarchy Battle Conclave. 1 Ministorum Priest or Uriah Jacobus. 3-10 units in any combination of Arco-flagellants, Crusaders or Death Cult Assassins. All models in the Formation form a single unit, and all models get the Shield of Faith rule.


Immolator: Gained a Fire Point on the top hatch (as per the draft FAQ).

Condemnor Boltgun: Only requires you to hit an enemy unit with a Psyker to cause Perils, rather than having to cause an Unsaved Wound (as per the draft FAQ)

Acts of Faith: They all now last until the End of the Turn, rather than the End of the Phase. This means some slight buffs, eg Battle Sister Squads can now carry their Preferred Enemy Act of Faith from the Shooting Phase into the Assault Phase of the same turn.

Exorcist: Exorcist Missile Launcher clarified to be a turret mounted weapon with a 360-degree arc of sight.


New Tactical Objectives:
* Slay the Heretic: Score 1 VP at the end of your turn if you killed any enemy characters during the turn

* Armour of Contempt: The next time one of your Adepta Sororitas makes a successful Shield of Faith save or Deny the Witch roll, immediately score 1 VP.

* Reclaim Lost Relic: Roll a D6 - Score 1 VP at the end of your turn if you control the objective that corresponds to the D6 result.

* Trust in the Emperor: Score 1 VP at the end of your turn if a unit with the Act of Faith rule destroys an enemy unit. If the unit was under the effects of an Act of Faith, score D3 VPs instead.

* The Blood of Martyrs: Next time one of your Adepta Sororitas characters is slain, score 1 VP. If the model as the Martyrdom rule, score D3 VPs instead.


Inquisition:
Inquisitors - lost the cheaper power weapon, power fist and plasma pistol options which are now standard price (with the exception of the Ordo Xenos Inquisitor, who can still take 10pt Power Swords but still can't take Power Fists or other Power Weapons).

Inquisitors - can now only take the Inquisitorial Relic associated with their Ordos.

Ordo Malleus Inquisitors - Can generate from Demonology (Malefic). Does not extend to Coteaz.... (heresy).

Inquisitor Coteaz - Gained the Lord of Formosa special rule. All units in the same detachment as Coteaz are Objective Secured.


Dedicated Transports - Lost Razorbacks and Rhinos, but gained Sororitas Rhinos. Chimeras are still only 55pts, but lost the 5 Fire Points (now work the same as Codex: Astra Militarum ie 2 Fire Points and the Lasgun Arrays rule). Lost the ability to give Inquisitorial Vehicle Upgrades to anything but the Chimera - this means no more Psybolt Land Raider Crusaders. This is because Land Raiders, Sororitas Rhinos and Valkyries come from the Grey Knight, Adepta Sororitas and Aeronautica Imperalis lists respectively, and can only take the Vehicle Upgrades listed in those sections.

Psykers Removed (ie no longer an option as a Henchman. Effectively moved to the Adepta Astra Telepathica section, where you can grab Primaris Psykers, Astropaths and Wyrdvane Psykers). Astropaths btw are 25pts for ML1 (Divination and Telepathy), same statline as the Astra Militarum Regimental Advisor. However you can upgrade this one to ML2 for 25pts, give him a Refractor Field for 10pts and also gets a rule where if he manifests a Psychic Power you can re-roll Reserve Rolls in your next turn. Basically a mini Primaris Psyker


Servitors Removed (moved to the Cult Mechanicus section of the book. Plasma Cannon option increased to 15pts from 10pts)


New Unit: Acolytes (Elite). 3 Acolytes for 12pts and can buy up to 9 more for 4pts/model. Same statline and wargear options as previous codex, however the cost of Carapace/Power armour upgrades are cut in half (2 and 5pts respectively). Any Acolyte can be upgraded to a Mystic for 6pts, and gain the same Psychic Beacon rule. Can take Chimeras, Sororitas Rhinos, all 3 Land Raider types or Valkyries as transports.


New Unit: Chimera (Heavy Support). Also lost the 5 fire points, and now works the same as the Astra Militarum one.


New Detachment: Inquisitorial Representative. 1 HQ, optional 3 Elites. One Inquisitor from the formation (including Unique models) can generate a Warlord Trait even if they are not the Warlord.


New Formation: Inquisitorial Henchman Warband. 1 Inquisitor (including Unique models), 1 Unit of Acolytes, 0-1 Ministorum Priests, 0-1 Crusaders, 0-6 Demonhosts, 0-1 Arco-flagellents, 0-1 Death Cult Assassins, 0-1 Tech-Priest Enginseer, 0-6 Jokearo Weaponsmiths, 0-1 Astropaths. All units except the Inquisitor must form a single Unit. Inquisitor can generate a Warlord Trait even if they are not the Warlord. Can include either a Battle Sister Squad, Grey Knight Terminator Squad or Deathwatch Veteran squad in the formation as per your Inquisitors Ordo.
12/14/2016
Natfka
40k, Imperial Agents, Inquisition, News Headlines, Rumors, Sisters of Battle, Warhammer 40k