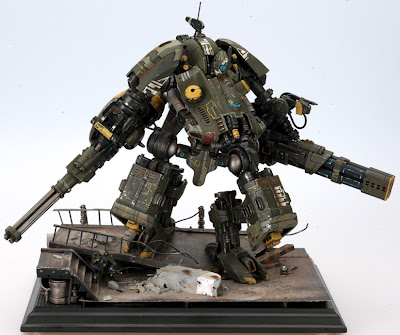 Yesterday on Faeit 212, we had posted up conflicting playtest rumors regarding a large battlesuit for Tau. Comments and thoughts on whether or not a people would rather have a Monstrous Creature or a Walker stepping into that role brought about a few playtester comments, or at least people claiming to be so.

I figured I would add those comments to a post so that you don't have dig through 60 comments to find them.

I would love to hear more from playtesters on this model, things like, were is it located in the FOC, weapons profiles, and possibly a quick discussion on the increase in broadside pt values.

via Anonymous playtest Comments on Faeit 212
I tested this battlesuit. That startling is correct, the 4+ invul. Comes from a shield generator. It does not have Inteceptor/skyfire

the "Big Battle Suit" I tested was noted as being on the large oval base, it's picture showed that it is VERY similar in design to the Golden Daemon Bot. It comes with the Rail Cannons if you would like for it to. It has BS 4 similar to the Hammerhead. It again, follows that profile. People are wondering is what it offers instead of the Broadsides. First, it's more flexible. Second, it can't be instant deathed (by high strength weaponry). Lastly, broadsides have gone up in cost slightly. What do broadsides provide? Dedicated anti tank and more railguns for the price. I find it likely that more dedicated tau armies will opt for the "Big Battlesuit" and more allied contingents will opt for broadsides.
11/29/2012
Natfka
40k , 6th Edition , Rumors , Tau , Warhammer 40k