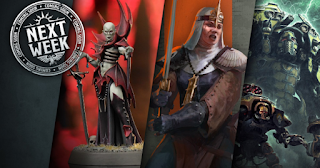 Warhammer Day comes this week with a load of preorders from Kill Team, Adeptus Titanicus, and more.
via WarCom
https://www.warhammer-community.com/2021/10/24/sunday-preview-celebrate-warhammer-day-with-all-of-these-magnificent-miniatures/

Next Saturday is Warhammer Day, a massive celebration of everything Warhammer. You can participate in lots of ways – by painting up your favourite miniatures, playing Warhammer with your pals, tuning into our massive online preview, and even getting your hands on some exclusive event miniatures.
You’ve got a whole week to prepare, and you’ll need it because we’ve got an absolutely mammoth pre-order weekend ahead, featuring Space Marines, vampires, tiny planes, a Legion Captain, a gaggle of painting accessories, Black Library books, and a hearty round of gripping shows and new additions to the Warhamer Vault on Warhammer+.

First up, we’ve got two exclusive Warhammer Day miniatures – and next Saturday is your chance to get both. 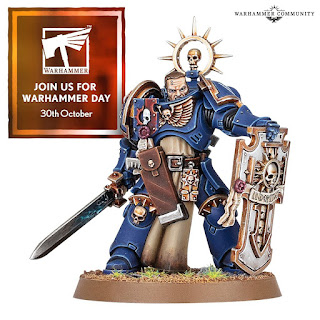 This fetching Primaris Lieutenant with Storm Shield will only be available from Games-Workshop.com, while Vampire Lord Anasta Malkorion will be on sale online, while also winging her way to stores near you too. And what’s that she’s found? 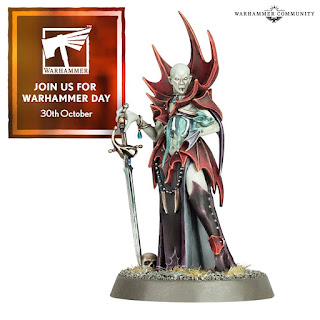 A delightful baby dragon! We know you’re waiting for dragons, so here’s a little one for you right now.* These two are only available for a strictly limited time, between Saturday the 30th of October and Sunday the 7th of November.

Now, let’s warp over to war zone Chalnath, where things are heating up in the first expansion for the latest edition of Kill Team.**
Kill Team: Chalnath 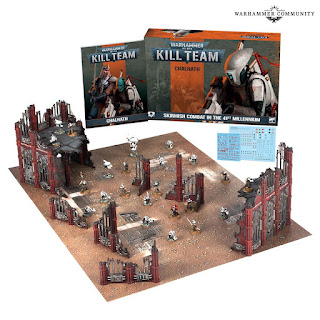 The T’au Empire and Adepta Sororitas clash in a series of violent running battles in the Vedik System with this new expansion for Kill Team – which comes complete with two full teams and a bunch of Imperial ruins to fight over. 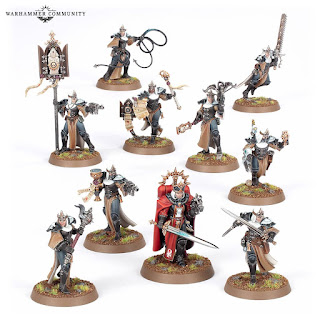 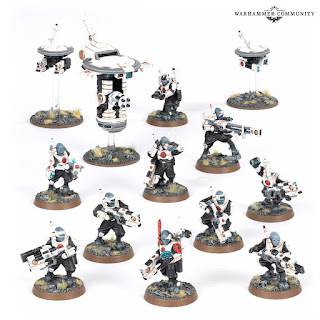 The all-new Adepta Sororitas Novitiates kit is a team of 10 fresh-faced Sisters of Battle eager to prove themselves worthy of induction into the main ranks. Against them stands a T’au Pathfinder Squad which includes an upgrade sprue full of new options to kit out your team of 10, plus three drones.
Kill Team: Chalnath also contains terrain, a double-sided gameboard, and a rules manual that contains new lore and rules that let you play out battles set in war zone Chalnath. Like many of our recent releases, we’ll be running a Pre-order Weekend Promise – so if you pre-order during Saturday or Sunday you’re guaranteed a box. 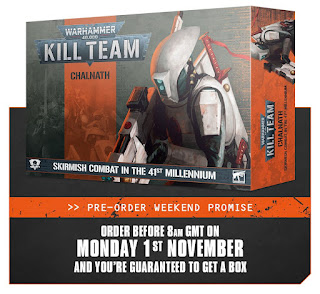 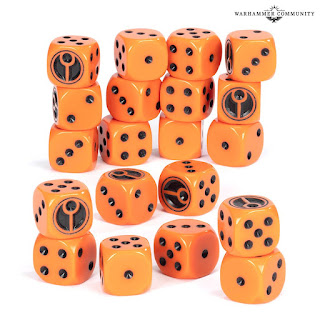 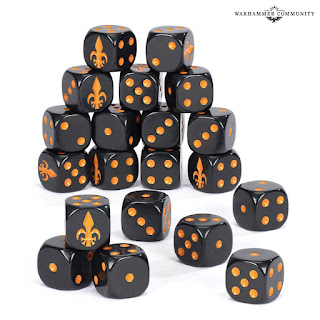 While you’re fighting for the fate of Chalnath, what better way to show your support for your favoured faction than some shiny new dice? Both of these sets come in striking Kill Team themed black and orange, with the T’au dice featuring the Empire’s logo on the six, while the Adepta Sororitas go with their old favourite the fleur-de-lys.
Adeptus Titanicus
We now move from skirmishes to warfare on a considerably grander scale with next week’s pre-orders for Adeptus Titanicus. 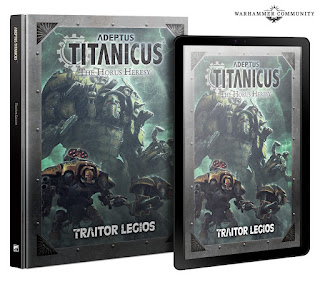 Strike fear in the hearts of the Loyalists with a book that includes everything you need to assemble and marshal a Titan Legion fighting for the Dark Gods. It contains background and rules for 11 Titan Legions, 12 Traitor Knight houses, and a glut of maniple formations and Stratagems, ideal for stomping and smashing in the name of the Warmaster.
Warmaster Iconoclast Heavy Battle Titan 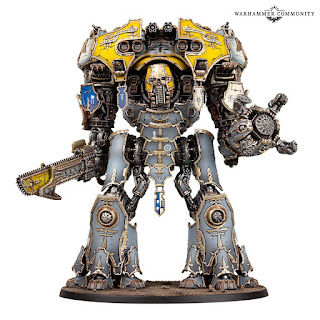 Towering above almost every other Titan, wielding a chainsword the size of a hab block and your choice of a Krius Siege Drill or Grav Imploder, the Warmaster Iconoclast Heavy Battle Titan is the last word in god-engine close combat.
Traitor Legion Transfers 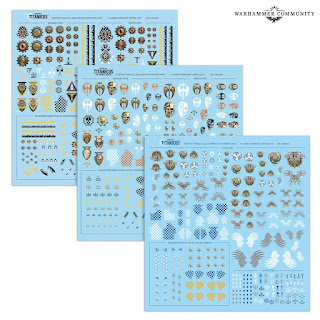 Who said being evil was any excuse for not looking good? Represent your Traitor Legio of choice on the battlefield with transfer sheets for Legio Fureans, Legio Krytos, and Legio Tempestus – perfect for letting everyone know who owns the hulking metal death machine roaring in for the kill.
Aeronautica
High above this titanic ground conflict, aerial aces battle it out in Aeronautica Imperialis.
Thunderhawk Gunship 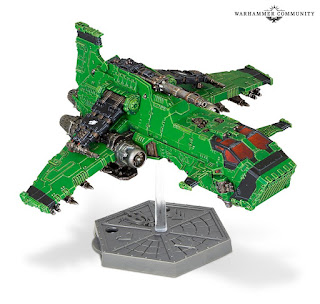 Yours to hold, and finally in plastic, this faithful recreation of one of the Adeptus Astartes’ most iconic vehicles is bristling with details. It’s the perfect painting project – just ask the lovely folk in Warhammer Community, who recently painted a squadron or two up a storm.
Fire Raptor Squadron 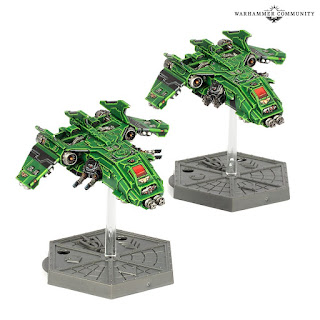 If the Thunderhawk Gunship is too big for you – if such a thing is even possible – then perhaps a Fire Raptor squadron is more to your taste. Based on the Storm Eagle, these little fighters eschew transport space to fit in more ammo and bigger guns, making them perfect for vicious aerial dogfights.
Space Marines aren’t just getting planes next week, though.
Citadel Colour
Next up is a host of brand-new hobby tools from the Citadel Colour range. These are all designed to work together to help you coat and paint the finer details of your models with ease.**
Citadel Painting Handle XL 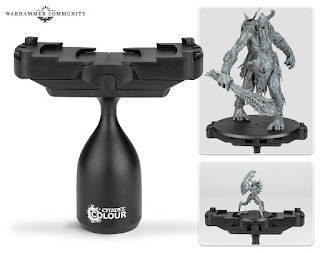 The new XL Painting Handle has the biggest double-sliding grip yet, designed to hold bases up to 170mm in width, meaning you can go hands-off with even the largest miniatures in your collection.
Citadel Colour Assembly Stand 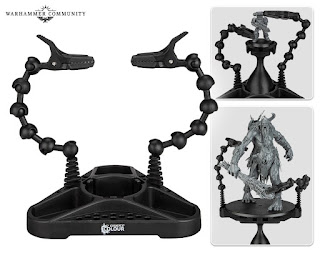 If you need to glue some pieces in position while getting on with other parts of construction, or waiting for a strong bond to form, the Assembly Stand has got you covered with two articulated arms that end in clamps to hold objects in place. You can even use this with a painting handle or the XL Painting Handle, which is compatible with the arms, so you’re able to use them to hold larger pieces in place while painting.
Citadel Colour Sub-assembly Holder 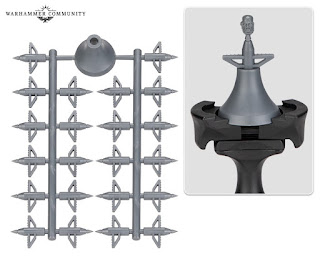 Tired of working on hard-to-reach pieces while painting? The sub-assembly holder contains 44 part holders made from the same plastic as Citadel miniatures, so you can easily glue small pieces like heads and weapons onto them for comfort while you’re painting, then clip them off and glue them to the model. They also come with two fluted bases that work perfectly with Citadel Colour painting handles.
Citadel Colour Spray Stick 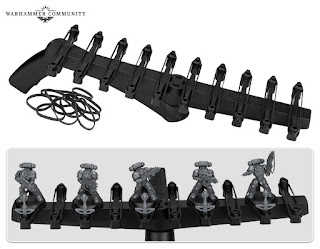 The latest version of the spray stick rotates, so you can quickly get total 360-degree coverage of your models while priming, without having to perform any Harlequin-esque contortions.
With all of these excellent new tools, you’ll need something to paint with them. While there are plenty of excellent miniatures for pre-orders this week, you’ll also want to keep an eye on Games-Workshop.com for special Warhammer Day promotions, where we’ll be making it easier for you to grab everything you need to jump into a new game.
Forgeworld
Savior of Calth – Remus Ventanus 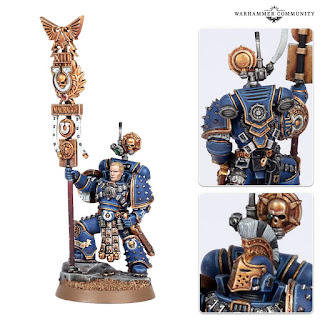 One of the central figures in the VIII Legion’s counter-offensive on Calth during the Horus Heresy, Remus Ventanus is the legend who earned the epithet “the Saviour of Calth” thanks to his herculean efforts against the Word Bearers. This cunning strategist will be available to pre-order next week, complete with a seriously impressive standard.
With the Fall of the Necromancer now available to order, a range of key thematic characters for the supplement’s Narrative Scenarios are breaking free from the grasp of darkness and returning to the range to buy from next week. Bolster your forces with this selection of Heroes and other models. 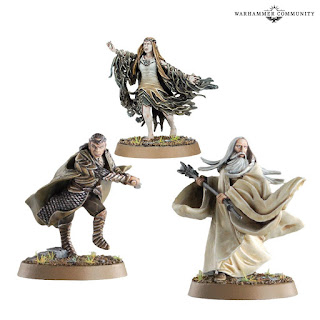 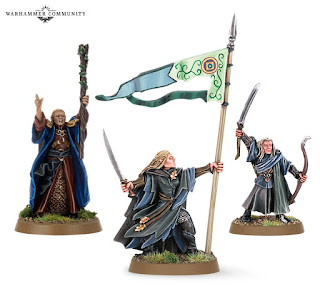 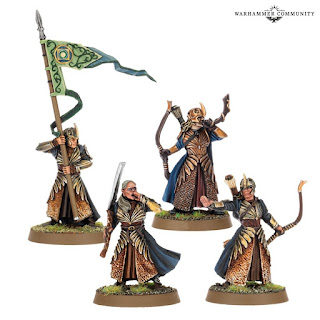 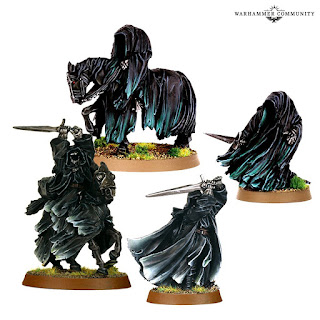 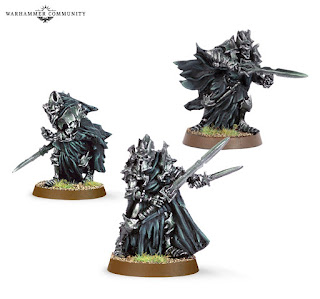 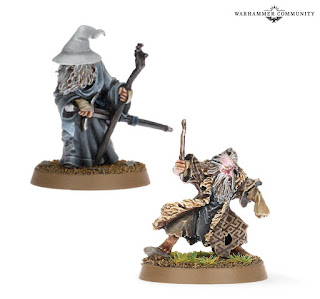 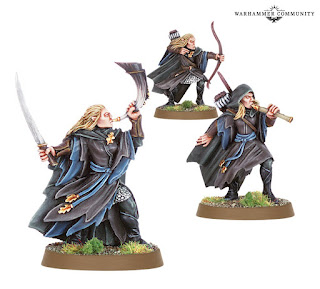 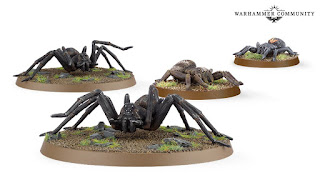 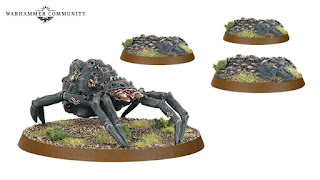