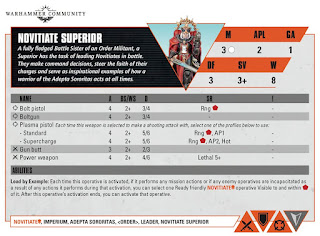 Previews of their stat lines and abilities for the Adepta Sororitas Novitiates Kill Team.

Kill Team: Chalnath is available for pre-order this Saturday, and it’s got the lot – thrills, spills, aliens with super-advanced railguns, and 10 Battle Sisters with an adamantine belief in the Emperor’s inalienable divinity.
Adepta Sororitas Novitiates are junior members of their order, a mixture of would-be Battle Sisters and others who will eventually find their way into the non-militant orders. As impetuous youths, these sisters bring a fanatical frenzy to supposedly covert missions, using flamers and massive double-handed eviscerator chainswords to bring the Emperor’s justice to their enemies.
Their zeal and go-getting attitudes often mean they’re deployed as kill teams, under the stern auspices of an experienced Sister Superior who can oversee their progress. 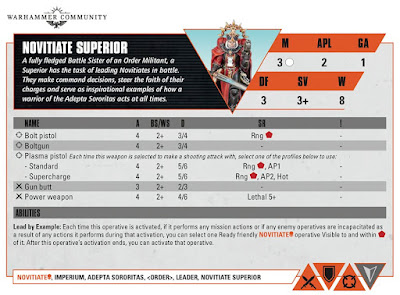 The Sister Superior wears full Adepta Sororitas power armour and can wield a boltgun – the only member of the squad to have that honour. She has a range of wargear available to her (and, as you’ll see from her sprue, some fantastic hats), while her Lead by Example special rule lets her activate another Novitiate if she does something cool, like incapacitate an enemy. 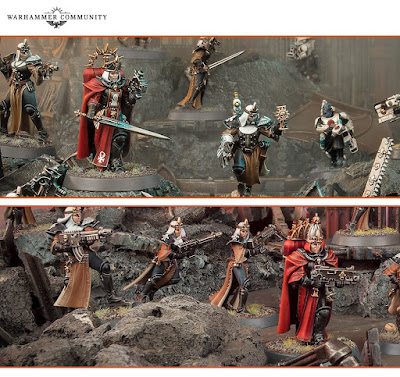 The Novitiate Superior is ably supported by a number of specialist squadmates who really could only find a place on the battlefields of the 41st Millennium. Take the Novitiate Exactor, the only “covert operative” in history to dual-wield neural whips. 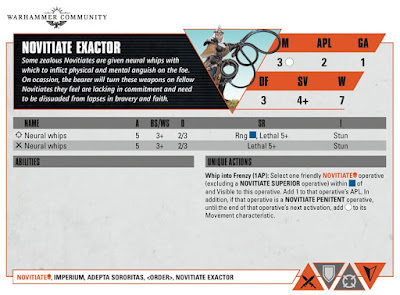 What could be stealthier than crackling electric cables that you turn on your own squadmates as often as you do your enemies? They might sound unpleasant, but they clearly work – it’s a great way to get your fellow sisters into action, granting them an extra AP and a burst of movement.
You can even encourage those who don’t lack enthusiasm, such as the Novitiate Penitent, who loves to go undercover with a chainsword that’s taller than she is… 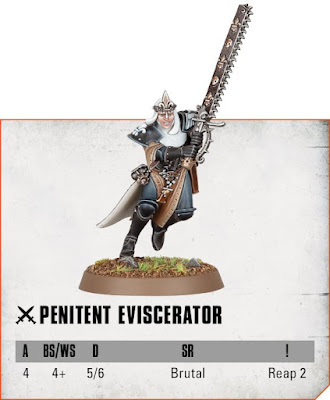 All of this fervour and piety does actually pay off, you see. The more zealous your Novitiates are in the prosecution of their duties – skulking around, sneaking about, covertly chunking enemy operatives with giant swords – the more points you earn to spend on Acts of Faith. And what do faith points mean? Re-rolls and extra crits. Devotion pays dividends. 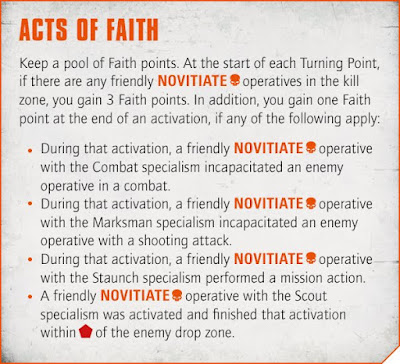 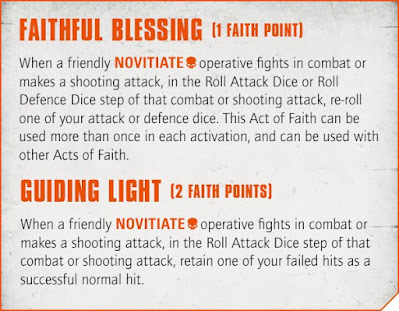 There are plenty of other Acts of Faith to use, allowing you to guarantee a critical hit at the crucial moment, or shrug off a mortal wound. The Emperor does, after all, provide. 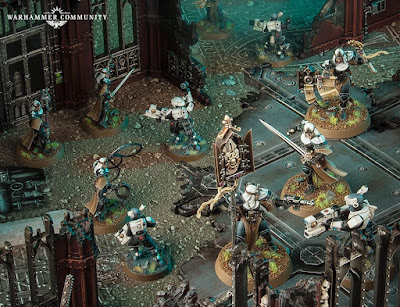 Of course, our brave Novitiates also have plenty of exclusive wargear they can collect on their travels. We’re particular fans of the Auto-chastiser, which lets you re-roll as many 1s as you like. Of course, if you roll more 1s, you take mortal wounds. The God-Emperor giveth, and He taketh away…

Finally, there are also bespoke ploys to help you demonstrate your devotion to the Emperor even harder. We’ve chosen a couple of especially fervent examples – Glorious Martyrdom lets you hurt yourself in exchange for extra faith points, while Aegis of the Emperor lets you hurt perfidious psykers just by closing your eyes and thinking really, really hard about how much you love Him.