There is another list of previews up for the Black Templar today and an army list showing off the mass amount of flames they can produce for an up close and personal Black Templar force.

The Black Templars Army Set is up for pre-order tomorrow, and Dorn’s most belligerent sons are just about ready to launch Crusades all across the galaxy. But that notion got us wondering – what is the most shamelessly aggressive Black Templars army list that we could think of?
Well, after perusing the new codex supplement included in their Army Set and meditating upon the teachings of Sigismund for guidance, we came up with this… 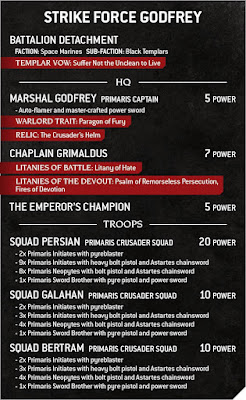 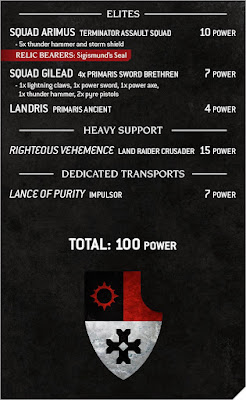 All three squads are kitted out with as many pyreflamers as possible, as well as (heavy) bolt pistols and Astartes chainswords for close-range dominance. 40 angry Space Marines running at you at full speed, supported by a Marshal with the Crusader’s Helm (to ensure they’re all in range of his Rites of Battle aura ability), and a Primaris Ancient to keep them fighting to the last, is certainly an intimidating prospect. 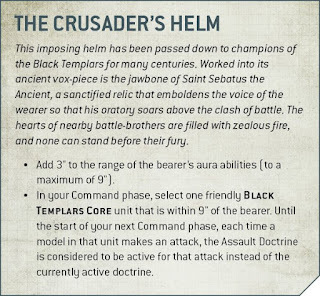 What’s more, they’ll also be augmented further by Grimaldus’ inspiring (and very angry) oratory. You’ll no doubt recognise the Litany of Hate, but what about the Litanies of the Devout? Well, Black Templars Chaplains have access to six bespoke litanies in the new codex supplement. We went with Psalm of Remorseless Persecution, and Fires of Devotion purely because they fitted our army’s theme of relentless aggression. 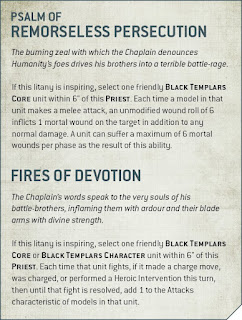 As any true fan of the faction will tell you, no Black Templars army is complete without an Emperor’s Champion. We included one on principle and gave him a unit of Primaris Sword Brethren to accompany him – and an Impulsor to drive them straight into the heart of enemy forces.

Finally, we just had to include a Land Raider Crusader. Not only does it look great in black, but it exemplifies the no-holds-barred fighting style of the Black Templars. What’s more, by sticking a Terminator Assault Squad in the cargo hold, there’s a nasty little trick you can pull off using the Chapter’s exclusive Relic Bearers rules. 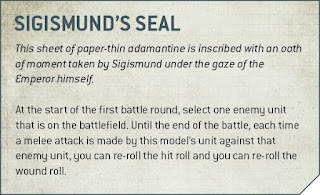 The cherry on the thematic top of our super-aggressive army list is our Templar Vow.
We went with Suffer Not the Unclean to Live. It’s the most unapologetically hostile as its Passion element obliges your Black Templars to charge the nearest enemy at all times. Purging heretics is like cleaning stairs – you start at the top and work your way down, rather than picking which to clean one at a time. 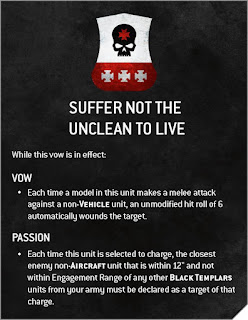 If you’re looking to make the most of the Black Templars Army Set but still maintain the theme of a full-bore assault force, the Redemptor Dreadnought would make a suitably brutal alternative. Not only is its Redemptor fist an excellent option for dealing with enemy armour in melee, but you’d be able to utilise Wisdom of the Ancients to provide your massed infantry advance with Tactical Precision in the absence of a Primaris Lieutenant. 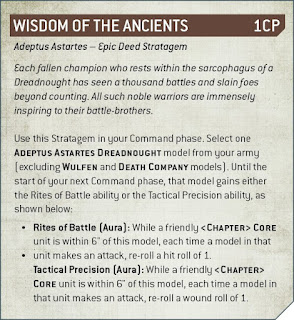 The Black Templars have potent Stratagem options at their disposal. This army is intended to deliver a huge knock-out punch to the enemy battleline with a massed infantry assault, which has the potential for overkill, leaving your potent melee specialists isolated from combat. Devout Push enables one unit that’s run out of heretics to stay on the front foot by moving closer to the action to keep the momentum going. 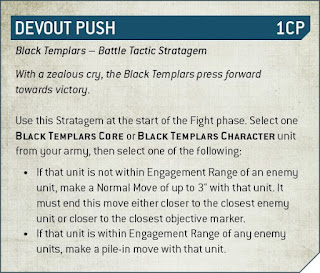