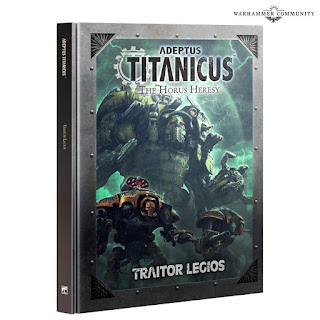 Adeptus Titanicus fans are definitely waiting excitedly on this one. Traitor Titan Legions and Knight Houses are one of the coolest parts of the lore whether for fighting against them or with them.

This book is absolutely packed with villainy, including the origins of dozens of storied Traitor Titan Legions and Knight Houses, cool rules for the most infamous legios, and tons of sumptuous – if unsettling – art. You can even corrupt your favourite Titans, showering them with ruinous favours such as Organic Protrusions, a Writhing Carapace, or Demonic Ichor.

spoilers for the Siege of Terra series – so don’t read on if you’re intending to check these fantastic novels out. 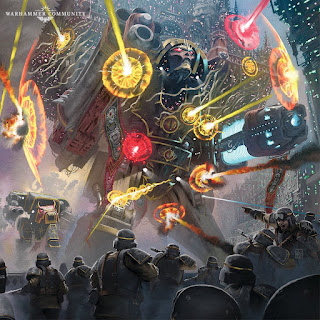 Legio Mortis, a.k.a. The Death’s Heads, have perpetrated many vile acts over the millennia, but perhaps their most spectacular ruse came during the Siege of Terra. By now thoroughly corrupted by Chaos and dripping daemonic effluvia, Legio Mortis used warp energy to infuse the shells of Loyalist Titans destroyed on Beta Garmon with Daemons. This turned them against their former comrades in a true perversion of the once noble god-engines that once they were (as seen in the book Mortis). 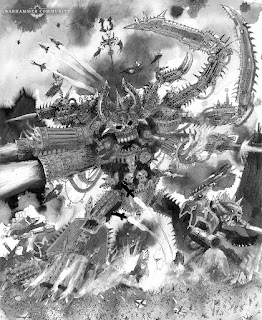 Even before the Horus Heresy, the Legio Krytos were known for the unusual glee they took in wiping worlds they took clean of all life. The legio first developed a taste for planetary annihilation before it had even rejoined the Imperium, when it locked horns with the Agrenium Convocation, a despotic local regime that conquered dozens of worlds, whose brainwashed soldiers fought to the death. The legion’s solution against an implacable foe was to eradicate the biosphere of every planet in the Convocation – and they never looked back. This particularly thorough brand of carnage would continue on Tallarn in the immediate aftermath of the virus bombing that poisoned the surface of a once-verdant planet. 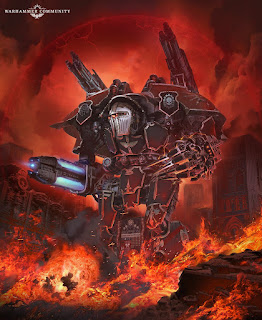 There are actually two Legios Vulcanum, both once based on the forge world Stygies VIII. Known as Dark Fire and Lords of Ruin, the two legions are so closely bound that cloning became commonplace for their senior princeps. But to the horror of the Adeptus Mechanicus, since falling to Chaos, the two Legions have used dark technological rituals to seemingly divide the machine spirits of notable Titans. They then enshrined these fragments in the systems of new titan chassis in an effort to replicate their powers. Heretical indeed.

Legio Mordaxis were early victims of a virulent techno-virus that caused them to leak a horribly corrosive, oily miasma from rents in their armour. Without a forge world as a base of operations, it was unclear to imperial scholars how the mysterious Deathdealers legion had managed to keep replenishing its numbers. But after one engagement, a swift investigation into a rapidly liquefying Titan shell suggested that it had once been in service to a Loyalist Legion… 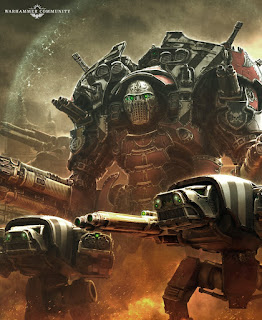 Corrupted by Slaanesh long before even Horus himself fell to Chaos, the Knight House Devine managed to maintain an outwardly loyal appearance for centuries, until the Battle for Molech, their homeworld. As the Warmaster mustered his forces to seek out a warpgate hidden beneath the capital city, Loyalists attacked en masse, only to be massacred from within their own midst as the treacherous forces of House Devine turned their fire on their erstwhile allies.

6. House Gotrith Discover That They Really Do Just Enjoy Killing

Once defenders of a battered planet lost during the Age of Strife, the nobles of House Gotrith became terribly jealous when their own populace began to celebrate the coming of the Emperor instead. Turning their rage at being usurped outwards, House Gotrith cut a bloody swathe across other human planets it was supposedly liberating. So when news of the Heresy came, nothing really changed for this Knight House – they were already loving the carnage far too much. 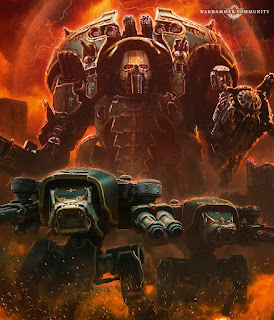 And those are just a few of the crimes committed by a handful of Traitor Legions and Knightly Houses. The Traitor Legios supplement will be out soon – and you can use it to pick one of the more infamous warbands or design one of your own for your games of Adeptus Titanicus. While you’re at it, why not include an Iconoclast Titan – the biggest and smashiest class of Titan in the game? This beast of a machine will also be out soon.