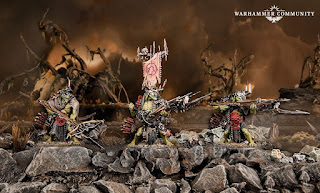 Man-Skewer Crossbows are a very solid looking miniature. How to use them in your Orruk Warclan?
Check out the list below and see how.
via WarCom
https://www.warhammer-community.com/2021/10/19/think-orruk-armies-cant-shoot-these-man-skewer-boltboyz-will-make-you-think-again/

As we discussed in another article on the Orruk Warclans, the best way to get the most from your shooting phase is to side with the Big Yellers warclan. Not only do their attacks gain extra range (not to mention a cheeky re-roll in the first battle round), they can – crucially – field Boltboyz as battleline units.
The increased maximum range of 27″ when making Aimed Shots with your Big Yellers Boltboyz gives you the freedom to set your units up a safer distance away from the enemy, and still Pick ’em Off with pin-point accuracy. 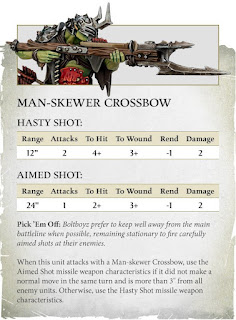 With a Damage of 2, every shot can fell a Stormcast Eternal, and at closer distances, you can double that output while slowly giving ground to buy time from the enemy advance, but the real sting comes from the Venom-Encrusted Weapons trait, which turns every hit roll of six into a mortal wound. 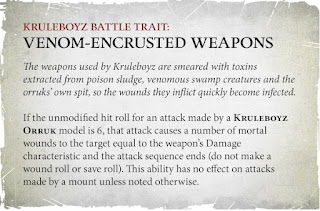 There are ways to make these vile concoctions even more noxious. There’s the Swampcalla Shaman, who,  when not muttering hexes at the enemy, is brewing up nasty Elixirs which make those Mortal Wounds happen on a 5+. Ouch. 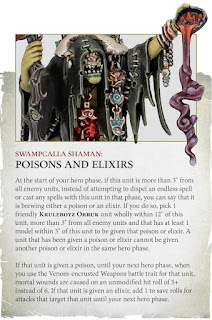 Still not noisome enough for you? Enter the Sludgeraker Beast. Ridden into battle by Snatcha Bosses, these creatures emit repellent gunge with which the Kruleboyz slather their weapons. 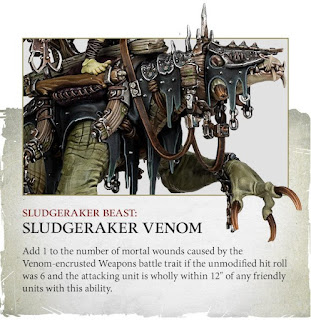 You’re reading that right, that’s one extra Mortal Wound on top of each of your regular two damage, allowing you to decimate enemy units. Luckily for your foes, the Sludgeraker Venom and Swampcalla poisons don’t combine into one super venom – rolls of five will “only” generate your usual damage in mortal wounds, you’ll still need natural sixes for the Sludgeraker Venom to give you 3(!) mortal wounds per hit. You can almost hear the forces of Order breathe a sigh of relief. 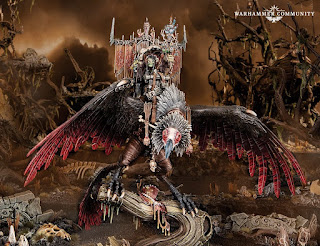 But what about large Monsters that are resilient enough to shake off a few wounds, and fast enough – or, worse still, able to fly – to close the distance?
That’s where your aptly named Beast-Skewer Killbows come in. 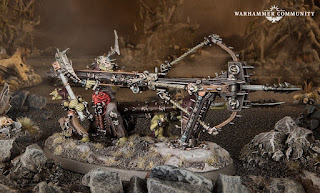 Not only does its Aimed Shot also hit on a 2+, but its horrifically deadly Skewered ability gives each shot a whopping maximum Damage of 12 – enough to kill a Mancrusher Gargant in a single hit! 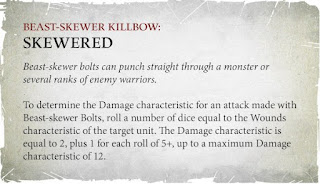 As a back-up, you can equip one of your Kruleboyz Heroes with Beastkilla Slop. It may not save you from a monstrous rampage, but if Kragnos smiles on you, this could be enough to finish it off the foe before it makes its normal attacks against you in the combat phase. 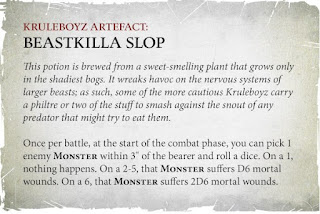 At close range, Hobgrot Slittaz can add their Sulphuric Scrap-grenades to your arsenal, while serving as a living shield to protect your more valuable missile units from an approaching enemy. As soon as it looks like your Boltboyz and Killbows will be under threat, send in the Hobgrots to interpose themselves between your firing line and the enemy, while pelting them with Scrap-grenades. 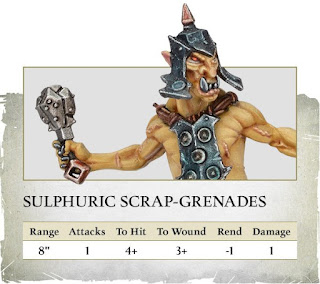 Put it all together and what have you got? An army full of horrid, foul smelling boyz, weapons drenched with unctuous, venomous substances, turning their foes into pincushions. 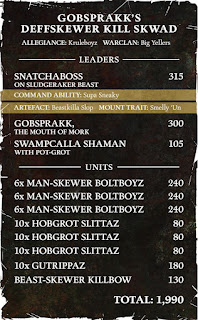 Three units of six Boltboyz take advantage of the Big Yellers command ability, while also being large enough to be a worthy target for the shaman’s poisons and elixirs.
Gutrippaz and Hobgrots are here to run interference and capture objectives. Should the enemy dare to bring the fight to you, Gobsprakk and the Snatchaboss will be more than capable of tearing them to shreds.