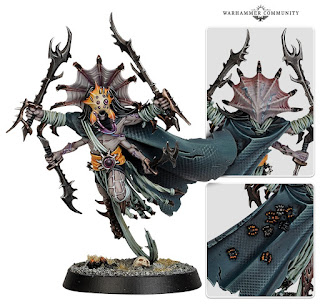 Meet the Broodmaster coming with the Red Harvest in WarCry.
via WarCom
https://www.warhammer-community.com/2021/10/18/this-new-warcry-fighter-loves-spiders-so-much-he-made-one-into-a-horrifying-mask/

Frankly, you wouldn’t want to meet him on a dark night on your own. You may have spotted a few clues to the Broodmaster’s identity in the video, but who is the Eightfold Watcher? And what are they watching? Our mandibles are sealed for now, but let’s take a closer look at this creepy new fighter.
We count six limbs there, four of them holding a rather gnarly sword, which means he’s probably quite dextrous or constantly nicking himself in battle. Either way, you just know he gives the best hugs.
And your eyes are not deceiving you – that really is the severed head of a giant Chaos-warped spider he’s using as a mask.