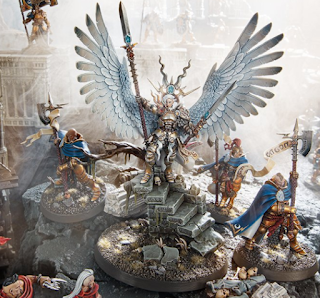 Coming to preorders this weekend is  Yndrasta for the Stormcast Eternals. Important enough to make the cover of the Core Rules, and a cool enough miniature to be used for painters and gamers alike. Lets take a look at who she is and what her rules look like.
via WarCom
https://www.warhammer-community.com/2021/06/17/think-your-boss-is-weird-new-stormcast-eternals-leader-yndrasta-collects-severed-heads/

Who Is Yndrasta?
This warrior-angel was once a tribal chieftain of a Ghurish nation, who rode a Pegasus alongside her fellow knights. Together, these warriors fought to hold back the rising tide of beasts and raiders that plagued their harsh homeland, but it was Doombreed, a champion of the Blood God, that finally brought Yndrasta’s people low.
To buy time for her tribe to evacuate, Yndrasta rode out to meet the daemon king in a duel she couldn’t hope to win. Though mortally wounded during the fight, she thrust her spear into Doombreed’s side in a final act of defiance and beseeched Sigmar to destroy them both with holy lightning. 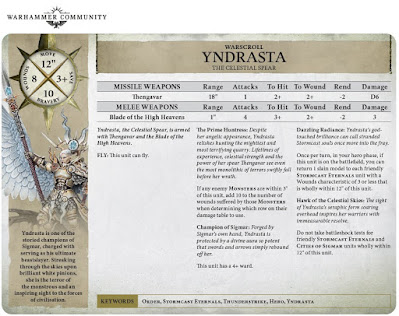 Thengavar, Yndrasta’s magical spear, can be hurled at enemy Monsters (and anyone else) to soften them up before she swoops in to finish them off with her blade. She can also use her god-like power to call fallen Stormcast Eternals back to the fight, and her presence makes them immune to battleshock tests. What better leader could you ask for when facing the likes of the Orruk Warclans?