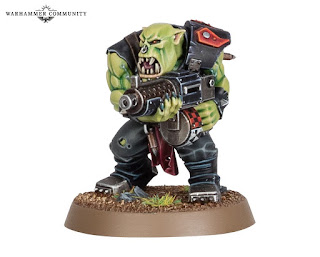 New Ork Boyz were on the Gaunts Ghosts box seen this weekend.

So here is the image people were talking about. 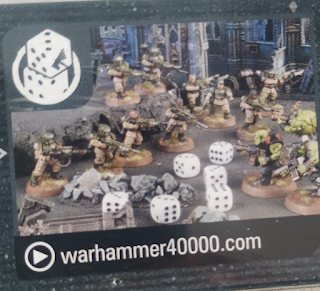 Here is the legend of the Great White Squig on this mornings WarCom Ere we go article.

Known by many names before it came into the possession of its current rider, the Great White Squig is widely regarded as the most belligerent, vicious, and savage squigosaur to ever crawl from the spawning grounds. Utterly untameable and responsible for a breathtaking number of missing Boyz, it wasn’t until the squigosaur met its match in an equally stubborn Beast Snagga named Mozrog Skragbad that any hope of controlling the monster could be found.
Mozrog, for his part, was already well known among the Snakebite clan as a particularly tough and surly hunter, albeit one who’d probably spent a little too much time away from his fellow Boyz. Legend has it that all it took was one piercing gaze to bring the rampaging squigosaur to heel, although in reality Mozrog scrapped, chased, and bludgeoned for three days before the alpha squig deigned to be ridden.
Newly christened ‘Big Chompa’, the Great White Squig is only kept in line by the sheer ornery belligerence of its long-suffering master, routinely returning to its usual destructive ways the moment Mozrog takes his eyes off it. As such, the two are rarely seen apart, and so the continued legend of steed and rider grows to this day.