Hedonites of Slaanesh in the New Edition 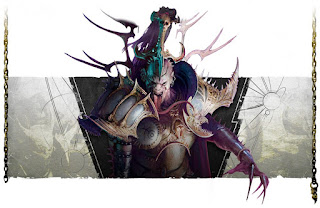 The Hedonites of Slaanesh in the new edition Age of Sigmar are getting their preview today. Lets see what's coming.
Preview from WarCom with Mike Willson chiming in.
https://www.warhammer-community.com/2021/06/11/the-new-edition-is-a-buffet-of-delights-for-the-hedonites-of-slaanesh/

Mike: Summoning large units, in particular, can be a game-winning move in the new edition of Warhammer Age of Sigmar, and Hedonites of Slaanesh can do it better than most, using their summoning abilities to bypass the limit on reinforced units and bring huge hordes of Daemonettes to the table. This can really put pressure on your opponent, swamping them with numbers and a barrage of deadly attacks.
The new command abilities really help out a lot of Hedonites units too, with All-out Attack letting you increase your damage output dramatically. Blissbarb Archers can use this ability in the Shooting phase to hit and wound on 3+, letting you pick off key Heroes early in the game.
The sub-faction that I think will do particularly well are the Godseekers, as their Maniacal Hunters rule allows them to generate Depravity points quickly with a Keeper of Secrets as their general. The Hunter Supreme command trait lets the Greater Daemon really pour damage into a specific target, while supporting units like Symbaresh Twinsouls use the Keeper’s command ability to fight twice with devastating effect.

Biggest Winners
There are many powerful and versatile units across the Hedonites of Slaanesh faction, and some more, in particular, are about to see some significant benefits from the new edition.
Sigvald, Prince of Slaanesh
The Magnificent One’s ability to call His Finest Hour in the hero phase – hitting, wounding, and saving on 2+ without having to spend a command point – not only makes him incredibly deadly, but it means he can still attack twice with a nearby Keeper of Secrets’ command ability. This is all before the opponent can attack back, although I don’t think there’s going to be much left after Sigvald’s done.
Myrmidesh Painbringers
Painbringers’ natural defensive bonus makes them a perfect anchor to your line. They’re more than just a defensive unit though – the Painmaster can issue the All-out Attack order, letting them hit on 2+ and giving you more chances to cause mortal wounds.
Symbaresh Twinsouls
The Symbaresh Twinsouls’ 2” reach is extremely useful. More of them will get to attack, and their natural re-rolls, plus any buffs from command abilities, let them deal a lot of damage – the enemy won’t know what hit them.
6/11/2021
Natfka
Age of Sigmar, Hedonites of Slaanesh