New FAQs and Errata for Warhammer 40,000 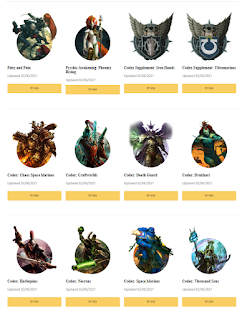 Very much every faction in Warhammer 40,000 is touched here. The biggest though are the Drukhari (Dark Eldar), Deep Striking, Imperial Armour, and Striking First and Last.
Go straight here to get your factions list....
https://www.warhammer-community.com/faqs/?utm_source=WarhammerCommunity&utm_medium=Post&utm_campaign=FAQ02062021&utm_content=FAQ02062021#warhammer-40000
via WarCom
https://www.warhammer-community.com/2021/06/02/find-out-how-the-latest-warhammer-40000-faqs-affect-your-favourite-faction/
summary of some of the key changes.
Strikes First and Strikes Last
As one of the main areas where interpretations of the rules differed, the Studio team has supplied a comprehensive visual guide to determining the order in which models fight when affected by ‘Always Strike First’ and ‘Always Strike Last’ abilities or both. In short, each combat is split into three separate steps:
Drukhari
Currently enjoying a dominant position across many tournaments, the dark denizens of Commorragh have seen a few tweaks. In particular:
Deep Striking and Reserves
Due to some quirky interactions with vertical distances (and some fascinating Pythagorean loopholes), certain units and Vehicles could be charged easier than others by units arriving from teleportation chambers or other similar rules.
As much as we’re fond of bringing ancient geometry to our tabletop battles, it didn’t treat all models fairly. To ensure there’s a level playing field the Studio team have clarified these distances. Now, you’ll always have to make that 9” charge to reach your foe on the turn you arrive.
Imperial Armour
To bring them up to speed with the units from their recent codexes, Forge World miniatures for the Death Guard, Adeptus Mechanicus, and more will be gaining the appropriate faction abilities and keywords where necessary. That means you can field your Secutarii straight away without needing to worry about them falling behind their comrades.
6/02/2021
Natfka
FAQ's and Errata, Warhammer 40k