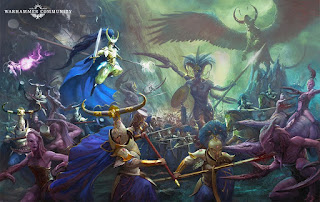 A new fighter card and new campaign for your games of WarCry.
via WarCom
https://www.warhammer-community.com/2021/04/28/bring-the-lumineth-to-warcry-with-free-fighter-cards-and-a-new-campaign/

Lumineth Realm-lords Fighter Cards
With a total of 19 fighter cards to choose from, you can put together a vast array of Lumineth warbands for your battles. For example, you could focus on the Hurakan temple and have a band of Hurakan Windchargers led by a Hurakan Windmage. Or you could take the new Vanari Lord Regent to lead a mixed warband into battle.
No matter the style and theme of your Lumineth warband, the Vanari Bladelords make for a tempting option too with their powerful [Quad] ability Perfect Strike.

With a potential output of 33 damage points from that bonus attack action, Bladelords have the ability to take down an Iron Golems Ogor Breacher in a single strike. Of course, you have to roll seven 6s to pull it off, but don’t let that stop you from trying – just think of the glory!
The Forlorn Hope
Also included is a new narrative campaign titled ‘The Forlorn Hope’. As with the previous narrative campaigns we’ve shared in these articles, this one is fairly quick to play through – with three battles in total, you can even play it from start to finish in a single evening.
This time we see the noble Lumineth Realm-lords pitted against the nefarious Ossiarch Bonereapers. It follows the events in Broken Realms: Teclis, as the Light of Eltharion marches alongside a band of the brave few to defeat Arkhan the Black upon the Realm’s Edge of Hysh.

What makes this narrative campaign exciting is that players get to use characters that would be too powerful for a regular game of Warcry. Both the Light of Eltharion and Arkhan the Black have fighter cards and abilities to use during this campaign, and the Ossiarch Bonereapers player can unleash a Nightmare Predator endless spell upon their foe.