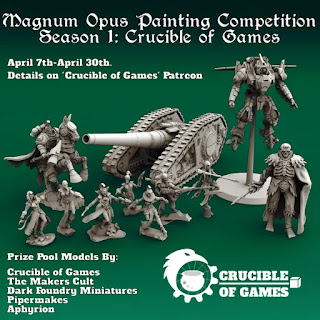 https://www.patreon.com/posts/start-to-work-on-49761296
via Crucible of Games

We're launching the first inter-Patreon painting contest!
Starting today we'll hold a monthly painting competition with the prize pool comprised of our very own pieces of art:) The biggest and priciest thing that we could give to our Patrons, fans and followers:) And the most important thing - the contest is free for anyone! So you even don't need to be a Patron to participate;)

Each month new 'Season' would be held on a different Patreon, and models released on that Patreon would be a subject of the competition. And CoG had been honoured to host the first iteration of the contest.

So please, welcome the team and organizers of the contest:
- Aphyrion with her mighty Araios Siege Engine;
- Crucible of Games with a full collection of Elven Carnevale Troupe;
- Dark Foundry Miniatures with incredibly armoured Polemarch by Cryminysakes;
- PiperMakes with her modular Starfish battlesuit;
- and finally The Makers Cult with their exclusive experiment - 54 mm Skull Knight by Garin.

Of course, such a big event requires special treatment. So we prepared a Very Special model to celebrate the launch of the contest. Please, welcome: Badlands Ranger Cornell Rover!
A grimdark sci-fi homage to one of the best-known actors in the world. A man of great renown - Chuck Norris himself:) And his famous role - Walker, the Texas Ranger. Players of both Necromunda and Warhammer could now field one of the mightiest warriors of all time. And smirk confidently while the mightiest heroes will retreat on the sight of his coming.

Part of this kit (one of the poses) would be available for free (both on our MMF and CGaT stores). However, the full 20-part kit (extra pose, and optional bits to modify the visual of your miniature) would be a Patreon exclusive forever and will remain available to any Patron, in our Welcome Pack:)

Now, let's return to the contest. How it would work?
Well, here are the rules:

Rules of Assessing the Transformation Contest