Soulbight Gravelords.... Feasting on the Highest Caliber of Foods 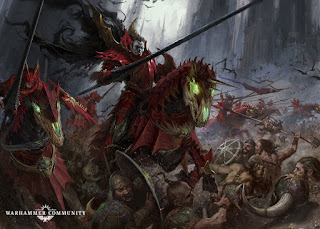 Soulblight Gravelords are coming soon but are apparently far enough away that there are no rules being shared today, just some concepts on how finicky and high on themselves the Bloodknights are. Of course some great artwork as well and a look at the miniature for Lady Annika.
via WarCom
https://www.warhammer-community.com/2021/04/20/they-may-be-vampires-but-blood-knights-are-notoriously-picky-eaters/ 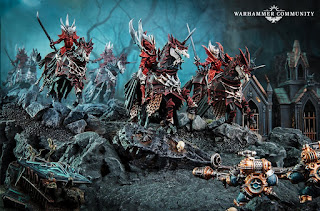 As with all their kin, Blood Knights are cursed to crave the fresh vital fluid of the living – even pausing to slake their thirst in the heat of battle. These haughty nobles believe there is honour in imbibing only the blood of the strongest foes, thinking themselves above the vampires that choose to feed on lesser beings.
It’s said that the founder of their order was able to master his affliction by drinking the blood of a ‘king among dragons’ – and the iconography of drakes features heavily in their heraldry. 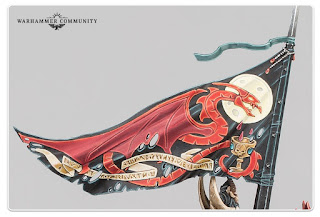 Blood Knights assemble themselves into martial orders, each with their own unique traditions. Though they differ in temperament, they all adhere to a strict code, and many fancy themselves as possessing a perverse sense of honour. 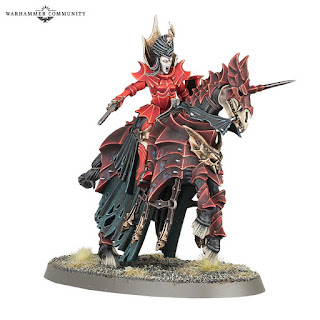 Just as with some high-born vampires, like the recently-revealed Lady Annika, they delude themselves into the belief that they’re somehow more than murderous beasts, reveling in the carnage and bloodshed.
In their cold, unbeating hearts, Blood Knights are all obsessed with the splash of gore across their armour. The scent of freshly spilt blood drives them into a frenzy of violence. While we can’t reveal their rules quite yet, it’s fair to say you’ll want them leading the charge in your Soulblight Gravelords army.