Meet the Chemists of Necromunda- Escher in Hive War 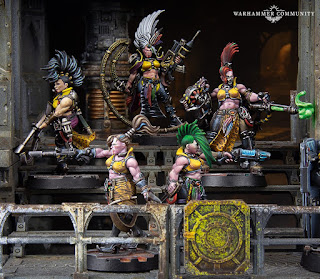 This is looking like a great boxset with two factions and all you need to play Necromunda. Earlier this week we looked at WarCom's introduction into the Delaque, now lets see what nasty chemicals the Escher are cooking up!
via WarCom
https://www.warhammer-community.com/2021/04/29/learn-about-the-master-chemists-that-could-poison-all-of-necromunda/

Who Are They?
House Escher is the most strikingly different of all of the Clan Houses on Necromunda as their population is almost entirely women. They produce a vast array of exotic pharmaceuticals, from gene-hancing elixirs to luxury drugs to deadly poisons, and the House derives most of its wealth and power from supplying these across the planet.*

How Do They Play?
The fighters in Escher gangs are fast, skilful, and deadly. They can field some incredibly flexible gangs too. With access to cheap and reliable lasguns, they can lay down a wall of firepower that will bring down even the hardiest of Goliath gangers. Their stiletto knives and stiletto swords both have the Toxin trait, making it easy to take out enemy fighters regardless of how many wounds they have. 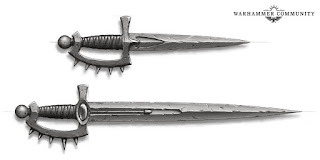 They can also take the ‘Nightshade’ chem-thrower, a weapon unique to Escher gangs. As a Template weapon, it can hit multiple fighters at once, giving you the chance to devastate an enemy gang with a single attack. This lethal weapon also has the Silent trait, so you can take out your foes before they even know you’re there.
Escher fighters can also take a chem-synth. This esoteric piece of equipment makes any weapon with the Toxin trait** or Gas trait*** even more potent by reducing the Toughness of your target. Your enemies will think twice before messing with House Escher in the future.
Talking about House Escher weapons and equipment, there’s also a plastic upgrade sprue coming out alongside Necromunda: Hive War. Packed with deadly weaponry and alternate heads, it’s perfect for personalising your gang. 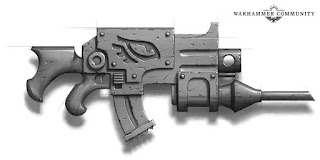 If you prefer using skill and speed over brute force, House Escher is for you. A full Escher gang comes in the new starter set, Necromunda: Hive War, which is available to pre-order early next month.