Lots of Crazy 40k events in the Lore of Faith of Fury... 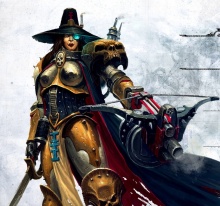 These are spoilers..... please don't read below if you get offended by that kind of thing, and stay out of the comments were discussion is taking place. Otherwise if you dare.... head on down and be wary that the Inquisition may need to have your purged.


BTW some of this is only in the Collectors Edition