The Future of the Horus Heresy 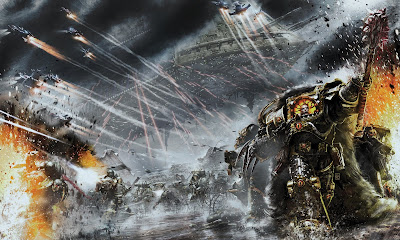 The Horus Heresy is one system from Games Workshop that people like to say is fading away at some near future point on the horizon. The latest though is that it is thriving and will continue to do so. Here is what was said.

via Penddraig and up on misc forums.

Originally posted by Penddraig, then forwarded first by the Age of Darkness Podcast on their Facebook page and then by Berne here on B&C.

The GW offices at Warhammer World are currently having a massive extension added. As well as new production facilities and warehouse space there is also more room for the various design studios. The plan is once this is constructed, each of the design studios (main GW, Specialist Games, Age of Darkness and Old World) will have more space for the various teams.

This also means that each team will be expanding considerably over the next two years. This will include new rules writers (2 more for Age of Darkness for example) and miniature designers. As part of the re-structuring, Andy Hoare (ex-Heresy rules writer and head of Specialist Games) is now manager of the Specialist Games Studio and the Age of Darkness studio. This role is extremely new so Andy has lots of ideas but nothing has been put into action yet. From personal experience, Andy is a great bloke who has a lot of experience within the hobby; a clear vision of where the company and the game systems can go and also communicates clearly about what is happening (within the usual limits of GW policy).

Future hopes and plans
After a long chat with the Forge World team it’s clear that the new re-structuring is still in early days and we aren’t likely to see much change as customers for the foreseeable future.

However, the team is aware of the main community concerns and hopes. The two key ones they mentioned are:
* A cheap introduction for new players into the 30k games set
* More plastic kits

Neither of these are confirmed as in production or development but the fact that the team are having conversations about these is positive. The team also discussed that by expanding the number of writers, it would be hoped that they could release more than one Heresy-related book a year. Once again, this is future developments so only Book 10 is in current development due to the current size of the team.

One final point that we discussed in a jokey manner was the ‘Heresy is dead’ mindset. It was mentioned that currently Heresy is still producing very healthy sales figures alongside other Specialist Games and the successes of all the games is allowing the company to invest heavily into new facilities and staff. One member of the team stated that there are so many long-plans for the Heresy that they expect that within two years, “everyone will be playing Heresy”.