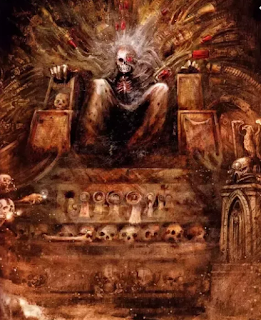 This is a good set of rumors that will lead us into the next year with some interesting bits from a source that says to be close to the the workings of what's going on. These are the things he has been hearing and wanted to help us launch into the new year with some information.

Notes here about the new edition of 40k scheduled as well as what happens when Psychic Awakening concludes! Seems to be something big on the horizon.

This 8th edition is scheduled to stay till half of 2021,
Events within the company could bring 9th even to summer 2020 with few months notice.

Less evident is that any big delay in the release chain (from delay in having the molds done, beta testing not going good, a new sculpture not approved and all that jazz) will not only be substituted by something else kept in storage for "empty periods", but also modify the lore/progress of the narrative if needed.
Therefore in GW the future is moldable more or less as in the Eye of Terror, ;-)


I heard about the two Chaos primarchs as the only Primarchs announced in 2020. If the rumor would have included Lorgar and saying that two among these three (Angron, Lorgar and Fulgrim) would arrive in 2020, it would required less salt to be endorsed. So far mouths in Nottingham are very tight about the second Primarch nature, I only herd through the grapevine that his summoning/first appearance will be in Armageddon, and yes, given the planet and the past events a Khornate intervention would be the most probable.

Also because yes, so far in WH40K 8th edition, for the Empire - as written in the "Emperor Angelicus" comments - the settings was not so dark as previously (despite the Nihil Empire, the Cicatrix and  so forth), but the real tempest will arrive after the end of the Psychic Awakening Series (scheduled to last a year from number 1) when we are supposed to see first something like Vigilus in size and scope, and that will be the grand finale that will lead to the 9th (maybe a book/special characters more around March 2021).

I remember that Vigilus at the moment  is the only event occuring in WH40K "present", while all the year with Psychic Awakening, is for the Galaxy at large to catch up and reach the same "present".

And yes, endless spells, finger crossed, should arrive with the 9th edition.
But, as far as I know, no Emperor Angelicus will be in for any faction, Sisters included. Every faction will have their own 3 endless spells tailored to that army lore/traditions and so forth, for example waves of blood (or something very similar) will be related to Blood of Angels "Red Thirst".