What's On Your Table: The Grim Dark

Thought: Power resides in the will of the Righteous

To the Great Master of News,

My humblest apologies that this has taken so long. I have followed your blog through rumors and storms ever since I fled the terrors of BOLS editions ago. Your blog has been a great source of Hobby for me and your BlogExhange has led my interest to many more wonders of this awesome community.

However, as a rather constant reader I have noticed your previous calls for submissions. Each time I have desired to participate yet the Emperor has always had other plans for me. For this I am deeply sorry. Yet in this time of Sanguinala I once again heard your summons and it was time to answer! Therefore here few pictures of my recent miniatures with scattering of WIPs.

Having started from rather traditional 40k background in the ancient times of the 3rd edition, in recent years I have more and more became fascinated by the darker aspects of the Grim and Dark universe. Having also infused myself with the wonderful role-playing games of FFG, I have noticed that blanchian insanity is spreading to my modeling as well. Fascinating characters, the wonderfully madness and most importantly: campaigns and connections between games.

[Picture1] Meet the current retinue of His Excellency, Rogue Trader Halten af Bolrekkar. The decadent lord of plunder and adventure (situated in the center of course) is leading his unlucky crew through a Grand Tour of the Imperium, causing all kinds of Fun in his wake. On his right is the trusty Senior Armsman Durke and to his left is Lieutenant Jetrong (who frequently wishes to have any other employer than Bolrekkar) and the sneaky relic-hunter Vules. They have done all kinds of jobs, from assisting Inquisitors, Space Hulk cleaning to theft of few Heresy era Atomics from a live warzone.

[Picture2] Is a collection of Imperial Spaceport scum, hanger-ons and citizens. Left to Right: Veteran, Gunslinger, Doc, Crazy Don, Melta-Merc, Grenadier and Alleyman. They represent ordinary generic people of the Imperium and as such are fun NPCs to use in games, although most of them are rather militant. 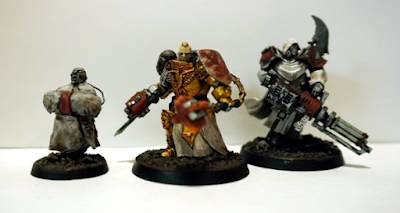 Speaking of scum... [Picture3] is the Most Humble Inquisitor Alfredo the Lionhart of Ordo Xenos, a frenemy and sometimes associate of Bolrekkar. His Subtleness is flanked by a mysterious, ever praying figure and a hulking gunner-acolyte. These two are recent additions after an.. Incident with another Inquisitor.

[Picture4], although not best picture ever taken, is a scattering of hive-dwellers. From the depths, they all are mutants and survivors of the worst conditions the Hive can throw at them. Despite this they are a closely-knit family and look forward to brighter futures. Left to Right: Poker (the pointman who goes first and tries to poke holes to anything that tries to eat them), Mop the Trader who is rumoured to have mysterious contacts, the silent One-Who-Carries-All-The-Gear, grumpy but warm Grandfather with too large chainsaw, mute yet smart Purple Big Teeth and Sabe the Thunderer aiming her experimental lightning-gun.

[Picture5] is the Psyren and some of her older victims. Her singing can and has driven many to do unspeakable horrors. And one can not ever have enough zombies!

And last but not least: [Picture6] few WIP additions to the Crew of Bolrekkar. A bionic beastman mercenary Preda (which accidentally ended looking rather like Predator and then converted even more). Next the deadly experienced Armsmaster - and Bolrekkars constant source of Hat-Feather Envy - Jaimespearre Von Hirstoff Junior Junior. Finally Standard Bearer Juline Bulkhead, because of course the drunken Space-Conquistador needs a flag to plant everywhere...


May the Emperor Guide your way and Merry Sanguinala!
-Dige


PS: First time taking pictures like this, darn few are blurry. Next ones hopely shall be of better quality!
12/18/2019
Natfka
What's On Your Table