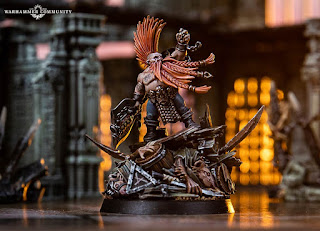 Seriously.... he is a warband all by himself and takes on all comers. How? Just check out the latest about his entry in this month's White Dwarf.

via the Warhammer Community
https://www.warhammer-community.com/2019/12/13/gotrek-hears-the-warcrygw-homepage-post-3/

He has six attacks at Strength 6, so he can throw out massive amounts of damage – and while he’s slow, he has abilities that let him close with enemies faster, plus a Quad ability that gives him a bonus attack that adds double the dice value used to determine damage – for a potential 18 damage for a critical hit!

Gotrek isn’t available to add to your warband – he’s far too brutal and no-one can count on the Slayer’s service – he goes where he will as he seeks his lost companion, his lost axe and a good fight.* Instead, his rules include two challenge battles you can use him in.

Any Chaos, Death and Destruction warbands can take on A Worthy Kill. This pits 1,500 points of your warband against the Slayer. Yep, that’s right, just him. Hardly seems fair, does it? You’re right, it’s not – for your warband.

In this challenge battle, Gotrek can use three actions each time he activates. There’s a decent chance that’s gonna be three of your fighters having a bad day. The objective here isn’t to kill him, it’s to see how long you last… Glory points await based on how many turns you survive before Gotrek kills literally every one of your fighters.

Order warbands can enjoy fighting alongside Gotrek instead, as they hunt for treasure and he seeks monsters to kill. The adversary player will use three monsters, who keep coming back when they die. One monster can randomly be designated a “monster prime” – it won’t respawn, so when it’s killed the game is over and you keep your gathered treasure. You grab the loot while Gotrek takes on the monsters (particularly brave fighters might want to help him out, not that he’s likely to need it). Everybody profits. Except the monsters.