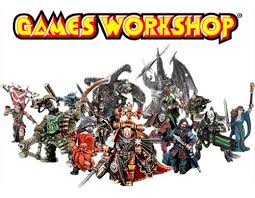 With all the new games one of the things I have been most concerned with is how they can keep up with it all. After all GW has so much in the works with so many different games it becomes reasonable to think that like in the past these games would slowly vanish. It appears GW has a plan for all of this and is moving forward to purchase more space, capacity, and even more warehouses.


These are rumors and even though come from a good source, need a little salt unless something official is said.
The source for this has been right and accurate several times in the past.

via anonymous sources at Faeit 212
Apparently GWHQ is buying and creating more design studio space, manufacturing space and machines and more warehouse/logistics space.The reason for this is they’re changing the whole process from design to manufacture to shipping.The design studio is apparently being split into 40K/HH, Warhammer Fantasy/AoS and Specialist Games/merchandising/media (films, cartoons, games etc).HH is set to become a staple gaming system alongside Warhammer Fantasy. So we will have ‘historical 30K’ (Great Crusade, Heresy era and The Scouring) alongside the ever changing narrative of the ‘current’ 40K storyline. HH will still be based on modified 7th Ed rules where as 40K will be based on the new 8th and onwards rules.The same will happen with Warhammer Fantasy and AoS. Warhammer Fantasy will be the old style rules, slightly modified, just like current HH. With AoS being the ongoing narrative we’ve seen so far.It will be like a historical-current affairs type of deal. One to cater to the old guard and one to the new guard. If that makes sense. We’ll be able to play ‘historical’ (HH/WFB) and ‘current-future’ (40K/AoS).Specialist Games will cover Titanicus, Inquisitor28, Necromunda, BloodBowl, GorkaMorka, BFG, Aeronautica, Warhammer Quest etc.They will also cover the new media fronts. Such as the new films, TV series, kids cartoons, comics and computer games etc.And there will apparently be extended merchandising.I believe the aim is to cater to everybody and to bring back old fans as well as drawing in many new fans by going more mainstream!This is an ongoing thing that is going to take several years to fully realise but it all sounds very promising. Especially with Horus Heresy and Warhammer Fantasy getting far more support with the aim to bring them inline with the current ‘core’ gaming systems like 40K/AoS with cheaper ways to get into them!