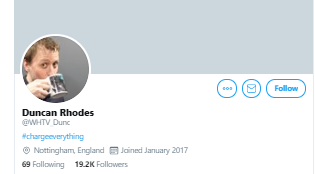 As is with the Christmas season things spread out and Ive been a little behind on this one. Duncan Rhodes is leaving Games Workshop at the end of the year. I pulled up his confirmational tweet acknowledging it.

As for Duncan.... He is one of my favorites and I am certain one of yours as well at Games Workshop. He has been an amazing contributor (giving donations) to the NOCF charities each year and I can only hope that this continues. I hope he lands somewhere amazing. We will follow.


Here is his tweet a couple days ago confirming his leaving.

Duncan Rhodes
@WHTV_Dunc
·
Dec 24
Hey folks, so I've seen some rumourmongering that I'm leaving Games Workshop. In the interest of honesty I will say now that yes, this is true, I am leaving at the end of the year, though I had hoped that it wouldn't have got out until Boxing Day at least...
12/29/2019
Natfka
Duncan Rhodes, Games Workshop