Magnate- Board Game Review and Last Few Days of the Kickstarter 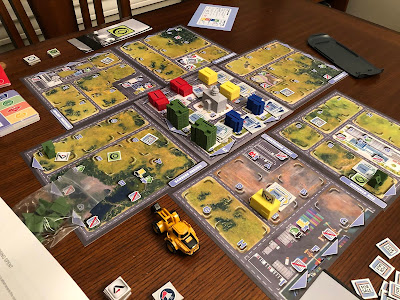 I got a chance to play a preview copy of this game and it is quite surprising and enjoyable to play. Need a break from the battlefields? here you buy and sell properties, attract tenants with advertising and try to outwit your opponents before the market crashes..... and it will. 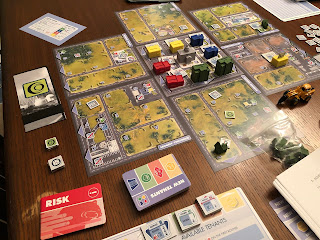 
There are a lot of parts to this game and at first it was a little daunting.

While the rules themselves (in their current early preview version) are 35 pages, the first 9 are setting up the board (changes every time you play) and getting players their the tokens. Pages 10-29 are the main rules and the rest of how to add an AI player to the game which allows for you to play by your self or add an extra player to the game. This allows you to easily have 1-5 players for the game.

Oh yea, there are advanced rules as well with new tenant types and more advanced building types. (we did not get into these, but wanted to)

So all that aside, the game at first appears a little complex, but once you get your first and second round of the game in, it all falls into place.


This is a turn order.
1. Bid for turn order
2. Attract Tenants and Collect Rent (you don't do this in the first round)
3. Player Actions- Each player gets to make 3 actions one at a time in order. This is where the majority of the game occurs.
4. Property Market/ End of round- this is where the market rises continuously and approaches that doom moment of a crash.

Lets talk about the Crash briefly. Its fun that what you and your players do during your turns, your actions, help in determining when the crash will occur. Too little going on or too much and your plans may be on a short fuse. There is a sweet spot in the game that limits just how quickly the crash is coming. Ya know.... self imposed moderation in buying and selling! So this crash feels looming and scary. yea it is in fact. We spent  a whole lot of our time talking among ourselves to try and not take too many of the risk cards that will bring the crash closer. So in that regard it felt very cooperative in game play. Otherwise we were scheming to get the most out of our properties, buying and selling and trying to get the right combination of tenants to help drive up the values and neighborhoods that gave the right bonuses for our properties.

The market crash coming is a timer to the game. Its coming and there is not much you can do to stop it. The better things get, the closer the crash looms over you. This form of cooperative play to help avoid a crash and yet take advantage of the hot market is where the game pushes the envelope. 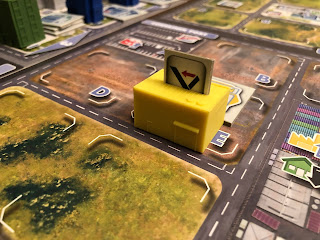 There is a lot going on during your player actions and this is the meat of the game..... Buy properties that are for sale... its a random generation which is awesome for replay-ability just like the neighborhoods. Putting up new building types where you think you will succeed to get bonuses to attract tenants.... (like parks helping pull in new home tenants), and areas that are better for industry or offices. 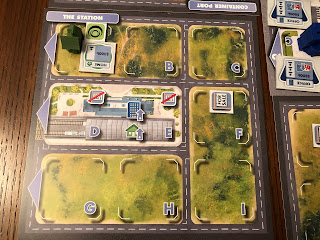 The fact that this game relies upon all of these and the building types and tenants are all interwoven really puts in just how much the designers put into this game. It really is sleek and intriguing just how they did this. 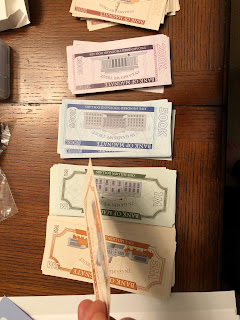 Quality of Game. The components of the game are really done well. The plastic pieces look nice and even the money used in the game is not the thin cheap monopoly money we are used to. Each money value bills are different sizes for easy determination of value (those 5mil bills are the biggest down to the lowest bill of 100k.) None of the cardboard pieces are overly thin, there is a solid thickness to them, so I it was all very good to see in a game that is not even out yet.


Overall I had a good time playing the game, and now that I have been through it, I can see that strategically there is a lot to it, more so than I expected and I look forward to trying the game with a full table of players, 4 or 5. I had two of use looking at it and a full table would be very interesting if not a lot more cutthroat, plus I know my dastardly gaming group would love to drive me to the poorhouse first chance they get.

Definitely a fun game, check it out at it's Kickstarter page, and know that it's on its final few days this week.
https://www.kickstarter.com/projects/magnategame/magnate-the-first-city
12/09/2019
Natfka
Kickstarter, Magnate