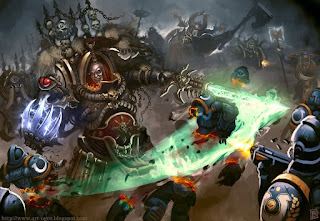 A new Abaddon coming in December? According to this rumor from a Youtuber in French, its coming. If something like this was coming towards Christmas or the end of the year, it would seem to be a perfect time for it.

As always with something like this.... add some salt. However with the Blackstone Fortress coming (which seems will come out before the end of the year) we could see future releases for it that might include Abaddon at a later date.

via  The Spanish Inquisitor on Bolter and Chainsword
http://www.bolterandchainsword.com/topic/349831-new-abaddon-and-obliterators/

A french youtuber, French Wargame Studio, who has a good rate of rumours just confirmed that a box set with a new Abaddon and new Obliterators was planned for release in December.

Translation:
"Four or Five month ago, an american guy "dreamt" of new obliterators. We had the same "dream". It would be for the end of the year, or beginning of next year, we'll have a recast of Abaddon and Obliterators. I saw Santa, he was talking to Abaddon: Abaddon was in a box set with some obliterators, fighting other people looking like humans [...]. (answering a question) No, it's not the Battle Sisters ! I don't know, maybe I spoke too quickly.  No, they will be imperial humans in 3+ power armor. "
9/06/2018
Natfka
8th Edition, Chaos Space Marines, Rumors, Warhammer 40k