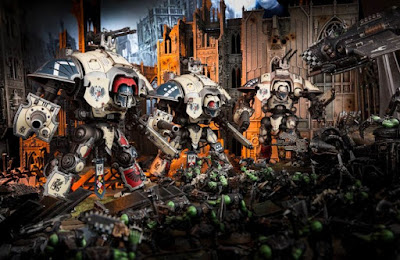 House Griffith is very popular and coming out with a new transfer sheet (that has some other houses on it too), so today the Warhammer Community is delving into the background and lore of the Imperial Knight house.

via the Warhammer Community
https://www.warhammer-community.com/2018/09/20/sep20house-griffith-a-tale-of-heroismgw-homepage-post-1/

The Imperial Knights Transfer Sheet has made its long-awaited return, featuring (amongst others) loads of awesome decals for the mighty Knights of House Griffith. But what is it about the nobles of House Griffith that makes them so, well… knightly? Luckily, Warhammer Community’s Simon Grant was actually involved in writing the first Codex: Imperial Knights and was responsible for developing the knight worlds as well as the knightly houses themselves. If you want to learn all about House Griffith, look no further… 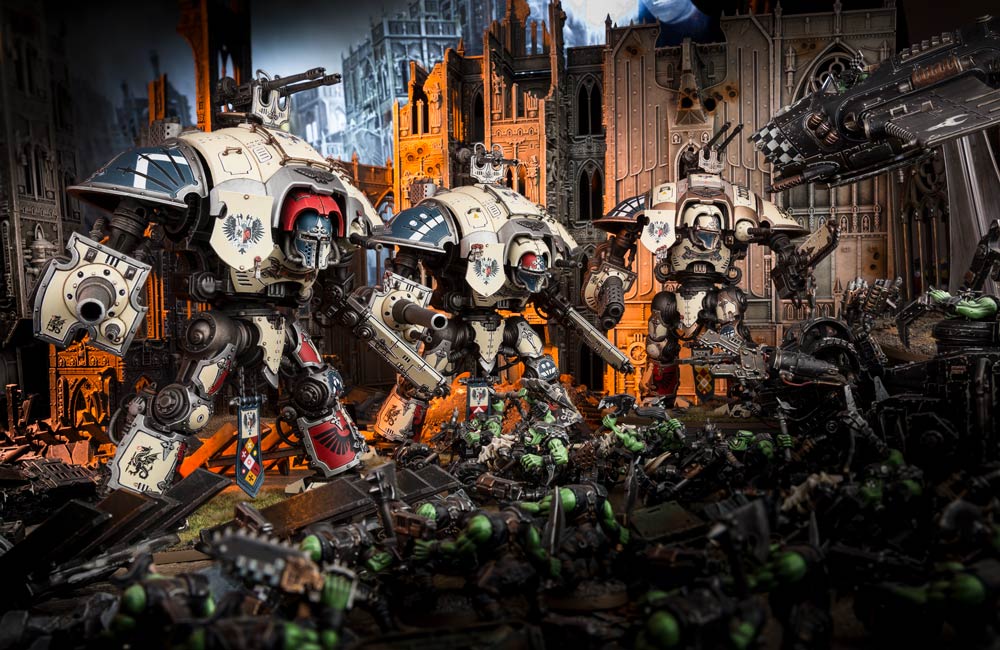 Simon: Right from the start, I sought to create a knightly house that epitomised the classic archetype of chivalric knights (or as close as one could imagine for an army of gigantic bipedal war machines of death). To a certain extent, of course, all of the houses reflect an element of this notion – such is the effect of the subliminal feudal influence of the Thrones Mechanicum. What I wanted, however, was a knightly house that dialled it up to 11.* So was House Griffith born…

House Griffith hails from a volcanic world that was beset by fearsome winged reptiles akin to the dragons of ancient Terran legend. So large and powerful were these apex predators that, until the arrival of Mankind, their dominion had remained unchallenged since life there first evolved. Within days of making landfall, the first settlers were attacked without warning, and soon succumbed to the terrible fury of the molten breath unleashed by their monstrous foes. Yet as fate would have it, one colonial vessel carried with it a herd of equine steeds (at no small expense to their owner) and a young man who had been raised on the fantastical deeds of mythological heroes of old. That man was Nathaniel Griffith.
A gifted artisan as well as a valiant soul, it was Nathaniel that first crafted a suit of armour from locally mined obsidian, and he that rode forth on horseback to do battle with the fell creature that had left many of his fellow voyagers dead during its initial attack a few days earlier. Nathaniel had noticed that the creature favoured using its fiery breath and that the volcanic glass of their surroundings had remained unblemished by the firestorm. He hoped that by donning armour wrought from the same substance, he could gain the opening he needed to land a killing stroke against the beast. Against seemingly impossible odds, Nathaniel’s plan worked and so was the first dragon slain. Nathaniel’s courageous act gained a brief respite for his people, enabling their budding settlement to survive when all others had been swiftly lost. 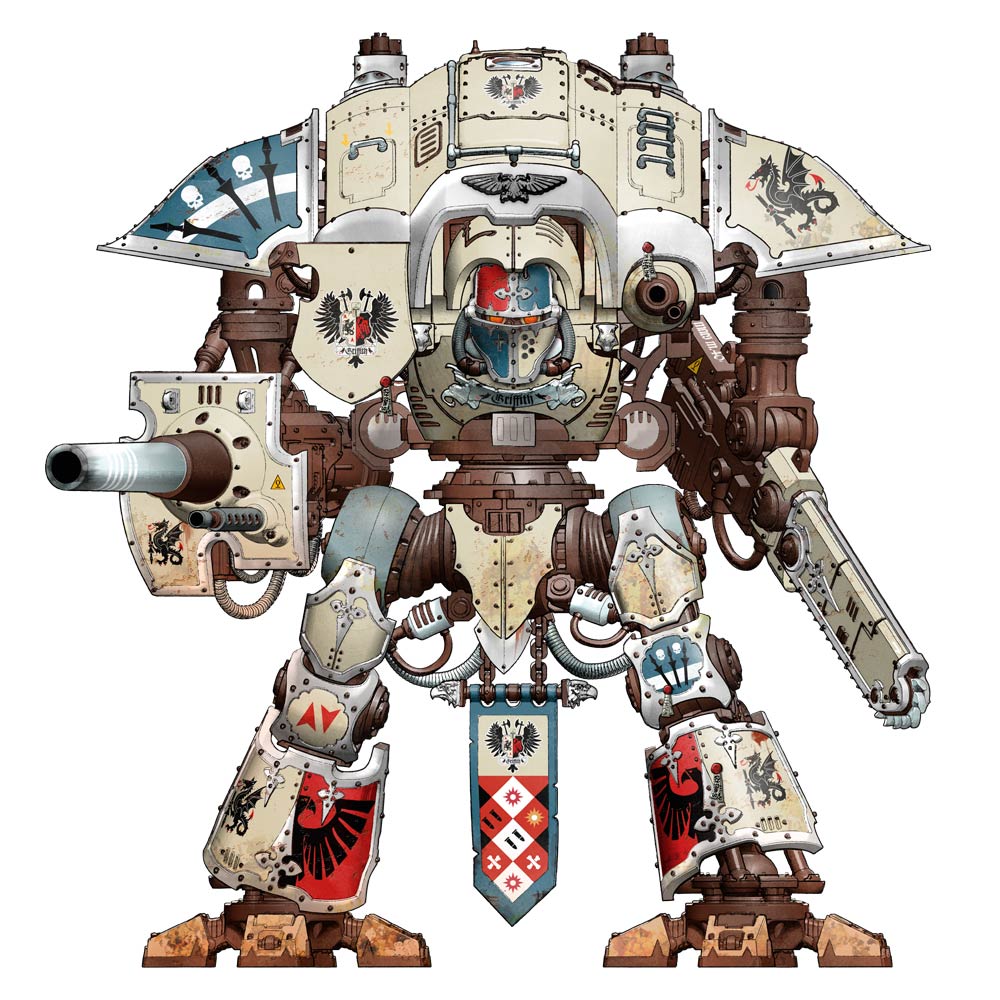 With no time to waste, Nathaniel pressed other like-minded individuals into his service and trained them hard in the skills they would need to ride and face their draconic foe. He knew that, until they could build the infrastructure that would enable them to craft more effective weaponry to defend the settlement, he and his knights would have to learn to kill the dragons unaided, or all would be lost.

As the war against their draconic foes continued to escalate, those of Nathaniel’s knights who did not fall in battle each became mighty warriors and dragon slayers. Nathaniel himself went on to slay another two of the creatures using a lance he had carved from the enormous thigh bone of his first kill. The third was the oldest and most powerful of their kind, Alvirax, its armoured hide so thick that, even though his aim was true, Nathaniel’s lance broke in the act of piercing the creature’s heart. Eventually, the introduction of the first Knight suits that had been developed by their vessel’s Standard Template Construct technology swung the war in the settlers’ favour. Having long since ascended to the leadership of his people, Nathaniel was the first to pilot a Knight suit against the dragons, their scaled hides proving no match for his Errant armour’s themal cannon. 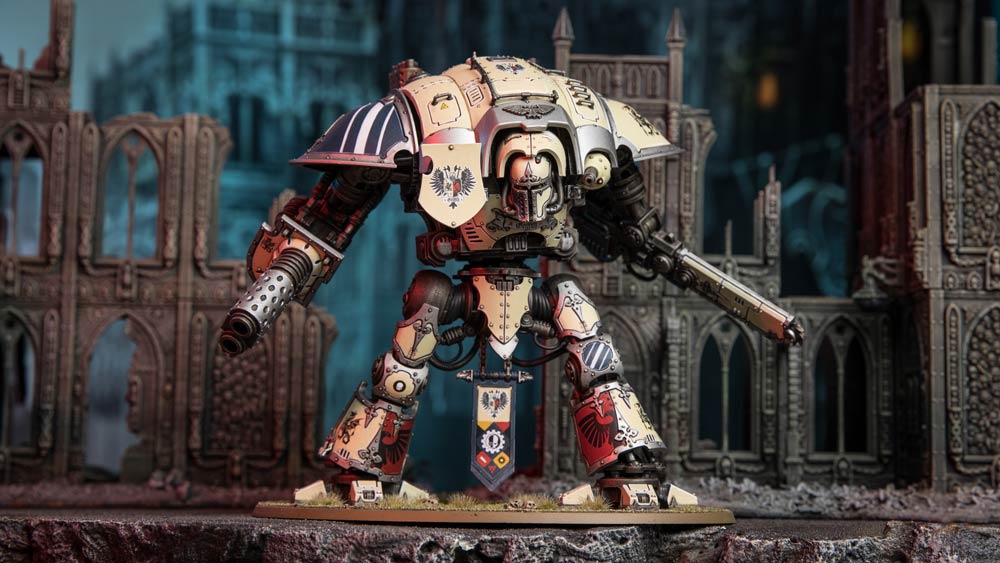 Eventually, the last of the dread beasts was hunted to extinction, leaving Mankind the undisputed rulers of a world that would henceforth be called Dragon’s End. Shortly afterwards, a knightly house was formally established, with Nathaniel as its lord and master, and named House Griffith in his honour. His fellow knights bestowed upon their lord the title of Grand Master of the Lance in recognition of both his skill at arms and the dragonbone lance he once wielded. As their coat of arms, House Griffith took the symbol of the great drake Alvirax and the broken lance that slew him, in remembrance of their founder’s greatest deed. 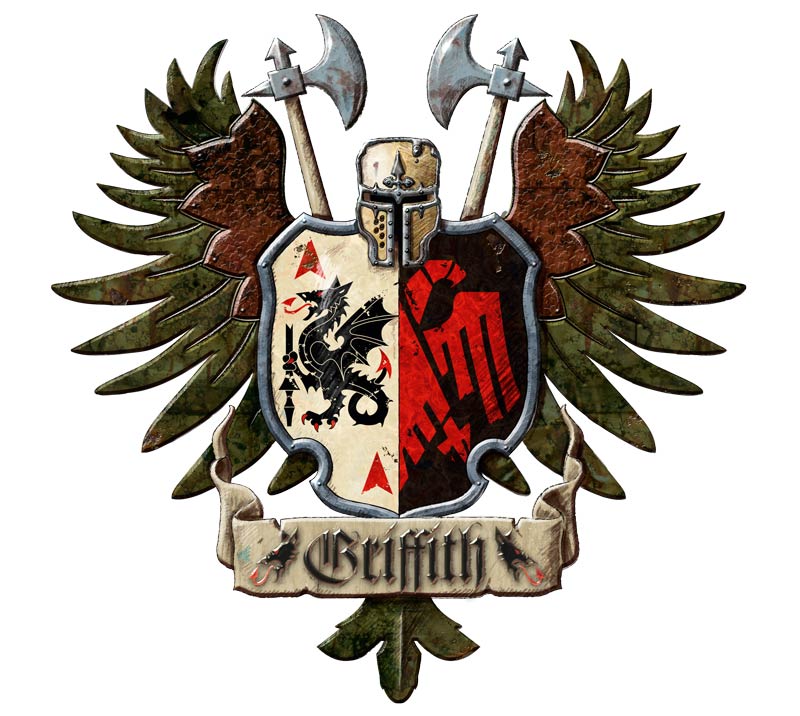 To this day, the Knights of House Griffith are renowned as amongst the deadliest of their kind at close quarters. Each noble of House Griffith must prove themselves as skilled warriors on horseback before they even earn the right to pilot a Knight suit, and they continue to hone these skills throughout their entire lives to triumph in the Field of Adamantium. This annual tourney sees nobles clad in full-plate adamantium armour engage in mounted contests of jousting and swordsmanship. By entering, the nobles risk their family’s position within society, but success will see them greatly elevated in the coming year, so it is always fiercely contested.
More so than the nobles of any other knightly house do the scions of House Griffith vie for supremacy over their peers and, as a result, they are all but unmatched in one-on-one combat. Their warrior spirit and determination to prove themselves ensures they remain amongst the deadliest Knights in the Imperium, as skilled with their Knight suit’s reaper chainblade as they are with lance and sword on horseback. When a lance of House Griffith Knights crashes into the foe, the battle is as good as won.
Well, if you didn’t know anything about House Griffith before, it’s fair to say that you do now! If you’re looking to start your own army of these knightliest Knights, you can pre-order the Knight Preceptor Canis Rex (which includes the parts to make every pattern of Questoris-class Knight – including the Errant suit so favoured by the noble pilots of Dragon’s End) and the Imperial Knights Transfer Sheet now.
* By which I mean the sort of knightly house that would appeal to a notorious cavalry enthusiast such as Duncan ‘Two Thin Coats (of Arms)’ Rhodes. As it turned out, Duncan
became one of House Griffith’s foremost advocates – just as planned! [cue maniacal laughter]