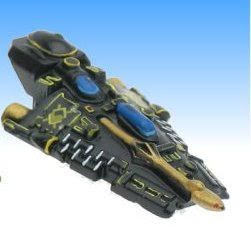 Here is some great news. Rumors now point to a 2nd wave of flyers due to us before August. Tau, Eldar and Dark Eldar oh my!.  This is huge news, and very exciting. I know tyranids are not mentioned, but Tau fans should be happy (can't win them all).  Also mentioned is a hint of another Necron flyer next year. Lets get to it.

The pic above is an eldar vehicle from epic, which sort of matches the description the rumor gives for the eldar flyer.

Please remember that these are rumors, and as such always require a little salt.

via Stickmonkey
I expect releases for tau, eldar, dark eldar before end of August.
Based on what I've heard/seen

Eldar are getting a dual kit. A fighter, bomber/heavy attack, and transport were in the works. The heavy attack craft and transport most share a design aesthetic. So this is what I am expecting.

The closest design analog I can give as a hint for the new eldar flyers is the wedge shape Jedi star fighters in the Star wars prequels.

Tau are getting a fighter/gunship in a single kit. Roughly the size of a Stormtalon. Has new missile options. Not the existing tau seekers.

Rule wise ( remember Im not good at getting accurate rule info, so add your own salt and keep it off the forum please) its supposed to take advantage of markerlights in a different way...allowing for indirect fire on any target in range with a markerlights on it from any other tau unit. This is with all it's weaponry, not just missiles. Or so the rumor goes.

Tau have a transport flyer also which should be out with the codex, not before.