Whoa, Plastic Lord of Change revealed! This thing look huge and looks very much like the new cover artwork for the Disciples of Tzeentch. Amazing. 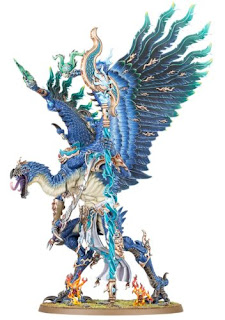 Get your first look at the incredible new Lord of Change miniature (though miniature is maybe not quite be the right word) on its way later this Tzaanuary.

Wow, right?
This towering Daemon of Tzeentch stands as tall as a Bloodthirster and sits alongside Magnus, Nagash and the Imperial Knight as one of the most iconic and imposing centerpiece miniatures in the whole Citadel range.
Every inch of this model is dripping in detail: esoteric runes, staring eyes, magical books, arcane scrolls and more besides – it’s a painter’s dream, especially when combined with the myriad colour schemes that Tzeentch’s greatest daemonic champions lend themselves to.

The kit can also be used to create Kairos Fateweaver, the notorious and fickle two-headed Daemon of past and future destinies. We’ll have some shots of this build for you very soon.

You can, of course, use this model in games of Warhammer 40,000 or Warhammer Age of Sigmar. For battles in the Mortal Realms, an updated Warscroll for this arcane behemoth will feature in the upcoming Disciples of Tzeentch Battletome.

In Warhammer 40,000, his rules remain unchanged from those in Codex: Chaos Daemons, though the recent War Zone: Fenris books, Curse of the Wulfen and Wrath of Magnus do both contain some new spells, artifacts and Formations he can use, as part of a standard Daemon force or a pure host of Tzeentchian warp-spawn.

The Lord of Change will be available to order later this month. 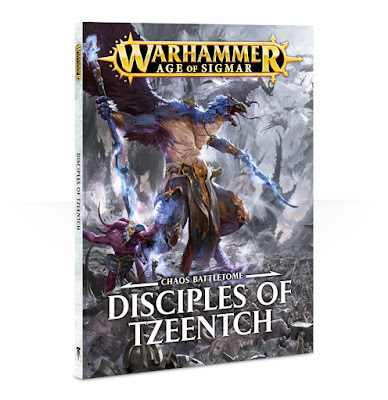