Blood Angels in the Near Future? Here are some signs.. 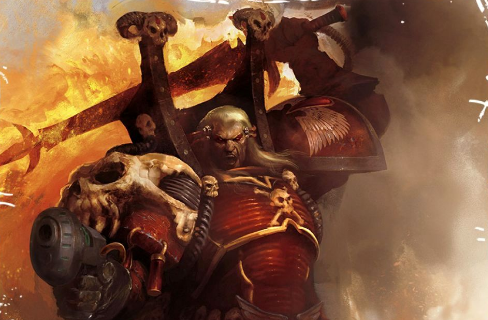 Could there be new Blood Angels models on the way? Most certainly, and there are some signs pointing in that direction.

While these most certainly do not shout "Blood Angels are Next!" we will be keeping a close eye on any other signs or whispers pointing in that direction.


via a reader on Faeit 212 regarding a new Horus Heresy Book revealed from the Black Library
Next HH book is Angellus, contains BLOOD ANGELS BABY!!!!!

So I was recently talking to a friend of mine who threw a rumor at me. Add salt to taste.

Apparently he was chatting with a GW rep and in the conversation some "New Blood Angels" models were mentioned by said rep.

My friend pressed the question, asking him essentially "Please tell me they're updating the ancient Mephiston sculpt?" which, according to him was met with a long pause and then a hurried "... I can't go into detail."

No idea how soon this may be, or if it's even legitimate, but I can say I trust my friend to be honest about this kind of thing.

That, and as we've seen with Eldrad, Kharn, and most recently Ahriman, GW is starting to replace the most ancient of their old models with new plastic hotness versions. Mephiston, Dante, and Corbulo are all quite old sculpts that are all candidates for a re-do. Another needing an update is Abbadon to be sure, and I'd expect to see a re-sculpt for him with the rumored Fall of Cadia happening after the first of the year.

If it happens, which model would you like to see? Dante isn't much of an option in my opinion since you can make a damn fine plastic kitbash version of him using Sanguinary Guard bits if you're so inclined. (My eventual plan, personally speaking). Corbulo is also not critical in my view, as his sculpt, while old, is still decent enough. That leaves Mephiston as the logical front runner. I'd love to see what the design studio can come up with for him. I hope to see a much more dynamic pose for the Lord of Death, personally.

Need to more about Mephiston?
Check out 40k wiki (obviously the best source for 40k lore)