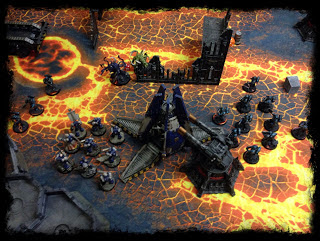 A very cool batrep was put up on the Community site that is worth taking a look at.


Via Nick on the Burning Eye
http://theburningeye.blogspot.com/2017/02/return-to-golovin-recon-strike.html

Greetings all,
well here it is - the first in a series of narrative games between myself and my good friend Ryan.

The aim: create a string of narrative game reports, where missions and their outcomes lead naturally onto new games, side missions and outcomes. These are to be written up in a narrative style as well, from both points of view, rather than simply reporting on what happened and what the score was as the game progressed.

As a side focus, Ryan and I have agreed to only use fully painted models for this series of reports, and we'll be including photos to really get down amongst the action and represent the game as it happened. Consequently you'll see fairly small forces taking part in the early stages of the campaign, and then as we increase the availability of units by getting them painted up you'll see the games expand. Hopefully we'll then manage to get a nice big apocalyptic conflict to end the series (though I have no idea yet when that end will be).

Hopefully things in the games will remain narrative focused, and whilst we'll obviously both be trying to win, I'm hoping to see some nice cinematic moments in there too.

I went with a fairly balanced force for the first mission, which we played to 1000pts. I had been hoping to find a recon mission somewhere, but in the end we decided to plump for the spoils of war maelstrom mission from the main rulebook to represent each force trying to gain intelligence on the other. The objectives would basically be narrative points to allow me to evolve the storyline. Ryan basically took what he had that was painted, though we both ended up finishing models the night before the game even so!

To see the battle report in it's entirety,
http://theburningeye.blogspot.com/2017/02/return-to-golovin-recon-strike.html