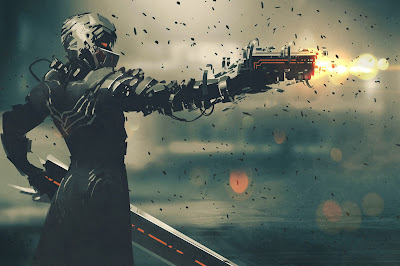 Many people have spent a lot of time building their factions for the Genesys Project. Its almost a game in itself, being able to completely customize your faction down to their weapons and powers. So while we will be talking more of that later, today I wanted to talk a little about game set up.


Setting up a game in the Genesys Project has some unique concepts for tabletop gaming, including list building, missions, and deployment.

The important thing to know though, is the order at which things are done. Here is an excerpt from the rules showing how a game is set up.

1. Decide on a Point Level of Play
2. Board Set up
3. The Genesys Campaign
4. Preparing your Forces
5. Arriving at the Battle
6. Gameplay

1. Deciding a Point Level: Each game level breaks down and focuses on certain types of units. For instance, below 500pts games will focus on standard unit types, allowing you to play a very small skirmish sort of game. It also allows for you to really dig in and focus on your standard units for modelling, background etc. Under 500pts your standard models are fielded as single character models.
As you move up in point levels, standard units form squads that increase in size depending upon the point level. The game then game focuses on either Elites, Leaders, or larger scale games.

2. Board Set up: This can be done before hand, and but the rules also allow for two players to set up the board themselves. Included are environmental effects that can change gameplay by either effecting movement or visibility.

3. Campaign/ Mission: Here your missions are rolled for. Each player has their own primary mission and both players share a secondary tie breaker mission. To win the game you must succeed in your mission while preventing your opponent to do the same. Secondary missions are the tie breakers.
Game Types
1. Assassinate
2. Kill Points
3. Expansion
4. Hold Ground
5. Objectives
6. Artifact

4. Preparing your Forces: Creating Your List. So far up to this point, you have simply determined the mission and location for your forces. Now its time to choose who you will send to accomplish the mission. Its time to form up your squads, equip them with what you think will work best for the mission, and get them ready to send in to battle.

5. Deployment/ Arriving at the Battle: Each board is divided up into section of possible deployment zones. These are numbered 1-6 for a standard deployment, and you may select which 3 you wish to deploy in. Two of which must be on your board edge. After selecting the deployment zones, total up the numbers of the three zones you selected and compare that with your opponent. If your total is lower..... You have initiative during the first round of gameplay.

6. Gameplay: Once deployed, the game begins. Each Game Round is a series of player turns, where you may activate up to your highest models command value. So while you may have a certain number of activations, the opposing player will also have the opportunity to counter with reactionary activations that will count towards his/her total activations during the next turn.

Last but least is the End Game: A normal game of the Genesys Project lasts 6 rounds. However, the game can be extended past that, if you think you have an opportunity to pull out victory or accomplish your mission. The end game can possibly take a game to round 10, although the farthest we have seen it go is round 9 during a lot of playtesting. The reason being is that to push the game limits into the End Game, you must have a high Command stat in your army to do it (and these guys may not be left alive on the field).
It works like this.
To get into round 7, you must roll a d6 and add your Command Value to it. If that number is a 7+ the game continues. In round 8, the result must be a 8+, and so on.