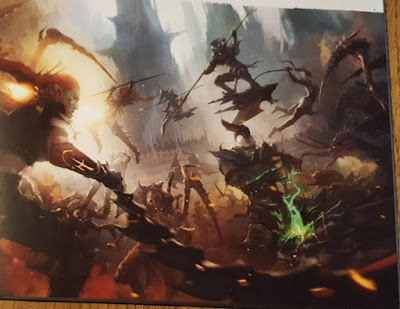 And before I could do an overview of what is in the book, someone beat me to it, and most likely did a better job. Here is an overview of the Fracture of the Biel-Tan.

- The story starts in Commoragh, in the Arena of the Cult of Strife. Yvraine first battles Lelith and gets stabbed in her belly, after that she kills a priest of Morai-Heg (someone that wasn't seen since the days of the ancient aeldari), but she also succumbs to her injuries.
- Yvraine gets reborne by Ynnead, he calls her "daughter". This also opens Khaine's Gate and a daemonic invasion starts to flood the Dark City. Vect is a coward, his rivals have to deal with the daemons.
- Yvraine and the Visarch flee with the help of Corsairs (they also sacrifice their ship in a real cool move that pisses Vect off).
- In the webway they fall into the trap set up by the Masque of Slaanesh, but they get rescued by Harlequins. They make their way to Biel-Tan.

- Skarbrand and the Masque team up and invade a Maiden World which has a webway-connection to Biel-Tan. The craftworld launches a counter-attack, but the daemons manage it through the portal and attack Biel-Tan.
- While the Masque is making her way through the craftworld, Skarbrand battles the Avatar of Khaine. They both destroy each other. The Masque managed it to reach the throne room of Khaine, gets on the throne and corrupts the Infinity Circuit. Biel-Tan starts to slowly decay from within.
- Jain-Zar leads the counter attack against the daemons, and Yvraine uses her psychic powers to turn daemonettes to ash. The daemons get banished but Biel-Tan seems to be lost.
- At a warcouncil, Yvraine says she is the Emissary of Ynnead and tells them that her god can be fully awakened without the death of all Eldar - they just need to get five Croneswords - forged by Vaul from the fingers of Morai-Heg's severed hand. Her own blade is one of these, and another is within Biel-Tan. The problem - getting the swords will probably destroy Biel-Tan for ever.
- Although some of the council are against it and even fight against the Ynnari, Yvraine manages to draw Asu-var out of a wraithbone structure. This destroys the Infinity Circuit but also awakens the Yncarne, Ynnead's avatar.
- Biel-Tan breaks into pieces, but not all is lost. They manage to save parts of it, which become ships, and the largest piece will become a new craftworld.

- Eldrad and the other seers of Ulthwé create a webway bridge between both craftworlds and bring the Ynnari to them.
- On Ulthwé, the Ynnari team up with Harlequins, Eldrad and Eldar from Altansar. Yvraine absorbs the soul of the leading Altansar warlock and gets her Gyrinx.

- Ynnari and friends make their way to Belial IV to get two more swords, but they get attacked by some Haemonculi aswell as Slaanesh daemons. They manage to get another one of the missing swords, but have to retreat. Iyanna Arienal and a strike force saves them and directs them to go to Iyanden.
- Iyanden is under attack by Daemons of Nurgle. Although they manage to board a nurgle hulk and kill the daemon prince there, Yriel gets killed and his corpse infected.
- Yriels corpse is brought back to Iyanden, but Iyanna can't bring him back to live. Yvraine plunges the Spear into Yriel’s chest and revives him, making him stronger than ever before. The Spear is revealed to be the last cronesword.
- A council is convened of the assembled Eldar forces. The plan is to help the humans fight against Chaos. They want to bring back a hero to lead them, instead of a corpse-emperor.
- Commoragh is rescued by Kheradruakh who opens a portal to the Realm of the Mandrakes. Everyone is pissed at Vect.

- The Ynnari and their allies make their way to the Cadia system, but they get attacked by Ahriman and his Thousand Sons.
- Ahriman sucks the Eldar Triumvirate into the warp, but they make a bargain. Yvraine turns his rubrics mortal again and Ahriman is happy, but the Yncarne sucks them into the warp. "The Whispering God gives new life, just as he takes life away."
- The Yncarne and the Phoenix Lords disappear, no sign of them save for a tunnel packed full of demon corpses.

- The Ynnari party finally arrive on Klasius - basically where Fall of Cadia ends. They team up with the humans and prepare for reaching the next stage of the journey - Macragge.
2/10/2017
Natfka
40k, Eldar, News Headlines, Warhammer 40k