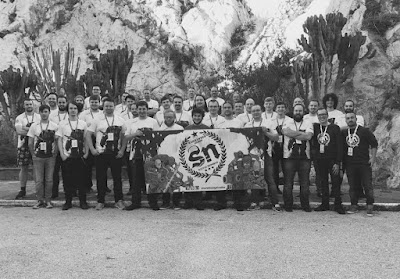 So once again we hosted a 36-man, independent, international Warhammer 40k tournament at the amazing self-contained venue (The Europa Retreat Centre) in Gibraltar. As always, from past experience, it proved to be the perfect venue to hold such an awesome event!


The tournament was a great success, attracting players from 11 different countries! Yep, you heard me right, 11! Some participants even needed Visa’s as they were coming all the way from Russia and Australia! This is not something we’re used to yet, so the thought of the efforts that some people must make to get here leaves us feeling very humble. Just like in the past, the event included a great number ofwell-known 40k YouTubers,some of the new ones being Visicast, Winters SEO and Imperium Gaming. Speaking of, the No Retreat I, II & III Champion Lawrence, from Tabletop Tactics returned to defend his (yet) unbeatable title using his amazing new Khorne Daemonkin army.This was the first time Lawrence was bringing something other than his notorious Dark Eldar,which had already granted him three tournament wins previously! Lawrence had backup once again in the form of Beard and Chef, also from Tabletop Tactics. Also from the UK were Siege Studios, our new fantastic sponsor Wargames UK and the remarkable Aceface! It was like watching our favourite YouTube Channels live! A great mix of our best local players and the best from around the globe,all of whom had an amazing time.
The tournament was held over two days and each player had five games to play. The rules for army composition and missions can be found atwww.snbattlereports.com. In short, it is a 1750 points event following ITC rules, witharmies comprised of a single detachment and up to one optional formation. We also apply strict WYSIWYG and only fully painted armies to make battles as immersive as possible.
We believe that the restrictions we have in our army composition rules allowsfor more fun games, where fluffier armies may have at least some opportunity to shine against other stronger codices.They are also in place so that the armies would look more like the classic 40k armies we used to see back in the day, which is what SN Battle Reports is all about. This appeared to work again and it was great to see the so called “weaker” armies rank up against the top tier ones.
Some of the prizes consisted of a Silver Spoon for last place, Players’ player award, Best Army award and5 special SN awards for those the SN Team thought were (in our opinion) the armies that best met our vision as the perfect looking 40k force.
In order to make this a fully immersive experience the SN team prepared some beautiful tables for the games,which were set up to the same standard as we would have in our battle reports. Line of sight blocking terrain was evident throughout and a couple of new tables made their debut including the awesome rocky and dessert outcrops by Gamemat and the ruined train depot by Terrain4games. A special thanks again to Wargames Terrain who have been responsible for supplying us with the amazing Eldar scenery, the now famous Crashed Imperial Space Ship, to name a couple and soon to arrive to our channel, the Mars Mecanicum Factory.
No Retreat Tournament Awards
1st John Hickton (England) (Aceface) Tau (Yes, we have a new champion!)
2nd Mark Crombleholme (England) Space Marines
3rd Darren Allen (England) Genestealer Cult
The Silver Spoon: Nathan Rodriguez (Gibraltar) Astra Militarum
Players’ Player Award: Hendrik Mueller (Germany)
Players’ Award for Best Army: JussiSalonen (Finland) Harlequins
SN Awards:
John Causton (England) CraftworldEldar
Jussi Salonen (Finland) Harlequins
Matthew Johnston (Australia) Chaos Daemons
Joe Jones (England) Thousand Sons
Rostislav Pankov (Russia) Craftworld Eldar
Finally the whole SN Team would like to thank everyone who attended to play and help make such an amazing event. A special thanks to those who made the effort of coming to Gibraltar from abroad for the tournament, it was great meeting you all. Also thanks to the generous people that sponsored the event and prizes such as GAMEMAT.eu, Wargame Terrain Factory, Wargames UK, Gibtelecom,Saccone& Speed, Siege Studios,Frontline Gamingand Kromlech.eu.
Another thanks to all the people who helped set up the venue and tidy-up afterwards!
If anyone here is interested in an invite to our next event (numbers are limited) drop us a message on our Facebook page or email us on snbattlereports@hotmail.com

On the behalf of the SN Team we would like to thank each and every one of you that attended our tournament and made it another absolutely awesome event. A tournament is only ever as good as its players and you guys were all fantastic and I hope you enjoyed it as much as we did. We have made a lot of good friends from this experience and we hope to see you again in the next No Retreat. So until then, safe journey home, and may the hobby be the winner #noretreatgibraltar