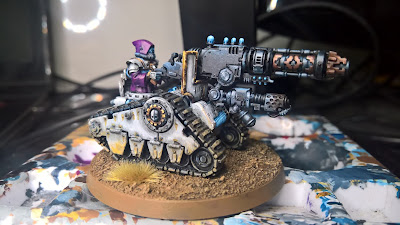 Anyway, this is my second submission to your site, you might remember me for the Emperor’s Children Contemptor Dreadnought I painted up and modded a bit from the Betrayal at Calth boxed set.


Now this is an idea I’ve had for awhile, but I’ve been short on time to really get a lot of things done lately. Anyway, I started a Skitarii army awhile back (which I’m ashamed to say is progressing at a snail’s pace) and I was interested in the Cult Mechanicus side too, but I wasn’t a fan of the aesthetic of the Kataphron Destroyers because it didn’t seem to fit as well with the rest of my Skitarii, but I definitely wanted some grav cannons in my list. Now I’m sure I’ll get a lot of flak for this, but I didn’t like the look of the torso on the treads, and I wanted my army to be comprised entirely of Skitarii. I’ve always loved the heavy weapons teams and tanks of the Imperial Guard, and the heavy weapons battery of the Eldar, and my other army is Dark Eldar which has none of these so I decided to experiment and create one for this army.

I’ve also included the instructions to do it, and my own thought processes while building it for those who are interested in making their own.

Now the pieces I used for this conversion are all from the Skitarii and Cult Mechanicus sets, namely the Onager Dunecrawler, Kataphron Destroyers, and the Sydonian Dragoon. I absolutely loved the chassis of the Kataphron Destroyers, to me it looked like I could create some sort of light tank/mobile artillery using it as the base. The port where the servitor comes out of was a great place for the gunner to sit, and as luck would have it, with a little cutting and sanding, I was able to take the gunner from the Onager Dunecrawler and have him sit in the hole. The problem with this was that it was now in reverse, and while that doesn’t seem like much of an issue, there is a flat plane where one would normally attach the exhaust pipes. Having the exhaust pipes in the front wouldn’t work and I didn’t want to leave it empty so the solution I came up with was to take one of the halves of the plasma cannons, cut off the edges, place it on the plane, green stuff the gaps, and have it look like an engine.

Now the next part was something I had pictured as soon as I had seen the sets when they first launched. I took the shield that is typically used for the Ironstrider Ballistarii (I built mine as a dragoon, so I didn’t need it) to use as a gun shield, as well as a place to mount the gun (which is the grav cannon from the destroyer kit shortened and attached to autocannon stock with the drums cut off). I also wanted to make sure that it still had the flamer to go with it and I was considering having a skitarii troop with a flamer to represent it, but ultimately opted to attach it to the grav cannon like an under-barrel attachment since there is an open area which is typically reserved to mount it on the servitor. The last addition I made was to take the plates that are originally purposed for the breacher’s abdomen and attach it to the back of the model like a chair to support the gunner and provide some extra defense from the rear.

And that about covers it for creating the model. I’ve again been using non-metallic metals to paint the model, but this was the first time I attempted at painting a NMM bronze. I think it turned out pretty well. Would love to get people’s thoughts and opinions. Anyway, Happy Lunar New Year from Korea! 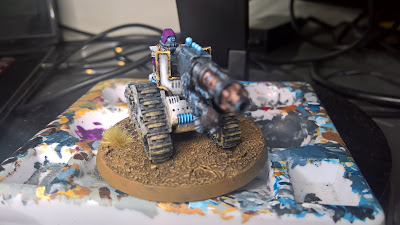 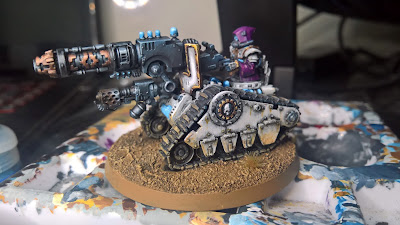 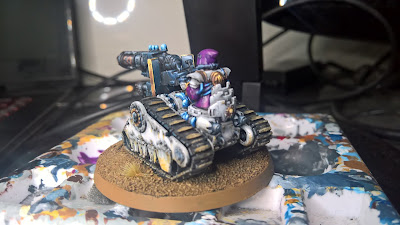 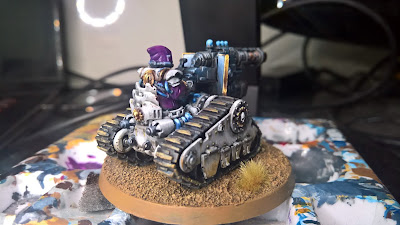