Cypher, Mortarion, and More Discussion on the Future Plot Line for 8th Edition 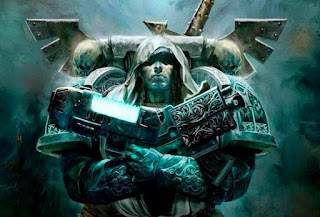 We have been hearing for some time now that Cypher is heading to Terra, quite possible to kill Abbadon. One source that sometimes hears things and passes them on, is chiming in on his/her past rumors and about what he or she has recently heard about Mortarian, the Custodes, etc.


Please remember these are rumors,

via Sources on Faeit 212
Can confirm:
Guilliman arriving at Terra and losing it with the Custodes for standing around guarding the emperor while the rest of the galaxy burns is how I was told (by the guy who said guilliman was coming) it would happen, and that that'show we'd get Custodes back into the game.

Now for the potential dissapointment, here's an update on previously related Mortarion stuff I'd passed along:

1) Originally heard from manager that he was packaged with Vect & Abaddon, but not lately
2) New Abaddon doesn't make sense if they're killing him off,
3) Not a single peep about Vect since the initial Eldar release,
So 1+2+3 probably safe to call Too Salty! on the 3-fer box of Mortarion/Vect/Abaddon.

Interesting tid-bit, second hand (extra salt) - Cypher may actually be on Terra to kill the Emperor and usher in a new "Age of Emperor" 8th. All I get when asking to confirm that with my normal source, though, was a wink and a "you'll enjoy this lead up to 8th, trust me. Don't worry about the name."