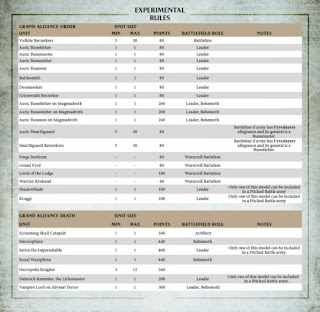 The General's Handbook is getting a revision soon, and Games Workshop has a sneak peak that was put up yesterday for us to check out.

Today, we’re happy to announce that we’ll be trialling some updates at the independant South Coast Grand Tournament event here in the UK. This 200-player event is one of the largest Age of Sigmar Tournaments in the world. The team that run it have long been community champions for the Warhammer Age of Sigmar game, helping playtest the General’s Handbook and many of the existing Battletomes.

We’re starting off with some amends to the points costs of Tomb Kings and Fyreslayers warscrolls. Some of these units, which we’ve seen be a little to dominant on the top tables of competitive events, have had their points increased, while others have had theirs reduced. (Great news for the sons of Grimnir – more Fyreslayers for your ur-gold!)

We know that not all of you can get to the event, so we thought we’d give you access to the updates we’re trialling here too:

These are far from the only rules that we’re looking to update in the next General’s Handbook. We’ve been paying close attention to all your feedback on the Warhammer Age of Sigmar Facebook page, so when we are ready to release the second one, we’re pretty sure you guys are going to love it.
2/08/2017
Natfka
Age of Sigmar