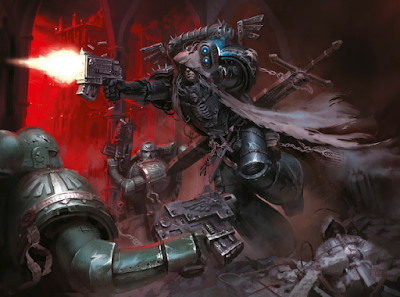 There is an interesting plot line here....... Cypher is coming, and quite possibly he ends the life of Abbadon on Terra..... This is not certain from the source here, but read these carefully, as we are heading into a big game changer for storyline of Warhammer 40k.


These are rumors and as such require salt, although this source is particularly solid.

via an anonymous source on Faeit 212
1. the bolt pistol may belong to Cypher
2. three books for gathering storms series
3. each book will have a trio of characters
4. last book is called the rise of legend/Primarch?, which obviously include a Primarch
5. last trio of characters will be: Grandpa Smurf, Cypher and a Grey Knight Master
6. then 8th edition
7. Abaddon is likely to be killed during the last book, possible he is killed by a bolt pistol
8. dwarf release and gryph hound release should still be there, but the focus is to finish off gathering storm series and launch 8th edition


Add on
40k new edition's content will be much reduced, but still bit longer than AoS rules, around 30 pages, likely release date will be summer. after Book III of the gathering storm.