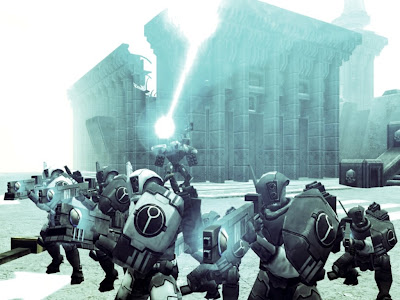 This mornings rumor set once again features Tau, with a very decent summary of what is expected. Some of this seems to correlate to what we already have heard, and some of it seems to push the envelope a little. It is getting closer and closer to a 40k release, so I am expecting rumor batches like this to start hitting.


If you have not visited 3++, you should, and you have been missing out. I have provided the link to the rumors so you can view the entire rumor conversation, and here is a link to the site in general.
http://www.3plusplus.net/

Please remember that these are rumors, and the required amount of salt needs to be included.

-Tau will be the first codex of next year

-Phil Kelly is writing the new book, not Cruddace or Ward as has otherwise been rumored.


-Crisis suits do not get a new kit, but they are getting an upgrade sprue for making special issue weapons and Broadsides.


-A Shas'el Commander unlocks Crisis suits as troops. Other types of commander are implied, including a Stealth Suit commander.


-Drones are changing significantly in how they are bought. Several new types of drones (heavy weapons, melee) are being added.


-Markerlights are Assault 1 weapons now; burning one counter lets you reroll misses or forces the enemy to reroll either cover or pinning tests. Pathfinders have the innate ability to split their fire to multiple targets.


-At least one unit from each of the five castes will be fieldable in the codex.


-There is at least one flyer (the Barracuda) in the book and getting a plastic kit, possibly more.


-Several other Forge World units (Tetras, XV9 Hazard Suits) are getting brought over as well.


-There is at least one new named character "pilot" for a flyer, a la Pask, but the system to represent them is apparently being reconsidered as part of 6E.


-Demiurg are added to the book, functioning "like Dwarves in Fantasy," with ponderous, low-AP guns and strong melee attacks. Hrud are present as well.


-Gue'vesa are available, working similarly to Inquisitorial allies drawn from the IG codex.


-Kroot Carnivores will be 5pts to bring them more in line with IG costs. They keep the same statline (and have Stealth?) but require a Shaper (unsure if he meant as an HQ or as a mandatory squad member.)


-Disruption Pod gives the Stealth USR and grants a 6+ cover save if you lack one.


-All Pulse weapons are Strength 6 in the new codex, as are Burst Cannons.


-Plasma Rifles and Missile Pods are now the same stats as their Imperial counterparts (the Plasmagun and Autocannon, respectively.)


-Seeker Missiles are 72" range and can be fired with one of several different profiles. The basic missile is still S8 AP3, but gains the Blast property. A second, "frag"-type mode is S6 AP5 Large Blast; these two fire modes come standard on the missiles (only one type can shoot each turn.) Two additional upgrade fire modes are available that improve on them, one that is S5 AP6 Large Blast No Cover Saves, another that is S9 AP1 and rolls 2d6 for penetration.


-The new codex expands on their fluff significantly, giving them more interactions with other xenos races, including resolving their grudge with Urien Rakarth and more on the story between them and Crowe.


-It's also implied that there is a faction friendly to (or at least neutral with) the Tau within the Imperium itself. Heresy!


-We learn a lot more about Tau culture and the kinds of lives their citizens lead.
1/10/2012
Natfka
Rumors , Tau