With all the disappointment of LOTR releases this month, yesterdays mornings rumors were forgotten, but apparently accurate. Here is the link if you are interested, although I have posted most of it below.

It does look like a Necron Battleforce is coming. I have posted up some more pictures. Although none of the battleforce. Can't seem to find them if they exist. 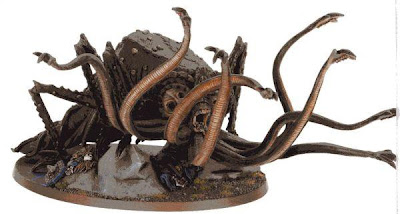 I am still including this in the rumor section, just because I cannot duplicate and verify the necron battleforce. Although its pretty certain its there. We will be seeing more probably within the next several days.

via BramGaunt (this is mostly from yesterday's rumor)
Time to get a little more specific.
LotR get's a relaunch this febuary (4th of feb to be precise).
Release includes 5 books (40k codex size and price, sadly no hardcover) that cover ALL armies. All existing books will be removed and are no longer for sale, except for the rulebook itself and the three campaign books for the three movies.

Following books will be released: Realms of Men (Arnor, Gondor, Rohan), Forces of Mordor (Mordor, Isengart, Moria/Misty Mountains Goblins), Free folk of Middle-Earth (Elves and Dwarfs I assumed), Fallen Realms (Harad and Easterlings) and one that sums up the rest.

The Books will contain updated rules for ALL LotR Miniatures and nullify the entries in the big Rulebook. The rulebook is not replaced, but each of the five new themed books contains several pages of updated rules. WotR will mostly vanish from stores and be a better supported specialist game. There will be releases for WotR, but the LotR tabletop stays the third of the three big GW games.

Expect your armies to change drastically.

The release is accompanied by one (1) new plastic box set (some kind of cavallery) and a whole bunch of finecast miniatures. Some old friends, like the WotR command boxes, and some genuine new sculpts.


There is nothing else happening in febuary, at least that's what I've been told. First pure LotR month for some time now. Expect pictures any day now, the new WD will feature a LOT of LotR.

Just to be clear about it: There is a planed 40k event in late febuary, but I was told that there was no actual release associated with it. Therefor I assumed that the Tyranid-wave will be first saturday of march. Same day as the 40k event is the release of the 25 years of Warhammer 40k White Dwarf, and it would be the day preorders started. Now, a world-wide 40k happening with staffers going nuts over Tyranid and Necron Preorders sounds exactly like something GW would do.

Also, I'd be more than happy to be wrong about the "nothing but LotR in feb" part, but I think LotR players deserve a month of their own =)

Since White Dwarfs should be on their ways right now I expect pictures to show up soon, anyway.

Again, I am not dead certain that there is nothing 40k related in feb, but my sources have been very specific. These ones have been accurate so far, I just pass on the information. Again, we will see in a couple of days. (Or, with the current WD leaks, more likely in the next 24 hours.)


via Rogue Star
According to Heresy-online forumite, Necron Battleforce is in there. Supposedly released on February 18th.
Contents are 5 Immortals/Deathmarks, 1 Ghost/Doomsday ark. 20 Necron Warriors and 5 Scarab bases. The WD also features a painting guide for the Battleforce.

via Romanus
Can confim no Necrons or Nid next month, however there is the release of the Necron and Vampire Counts Battalion Box sets along with something called the Deathknell watch for fantasy, other then that some interesting Black Library releases and some 40k combo kits (Tac Squad and Drop Pod etc) for 40k, all the rest is unfortunatley LOTR.
1/25/2012
Natfka
Announcements , Necrons , Rumors