Rules of Our Game: The Within 1" rule 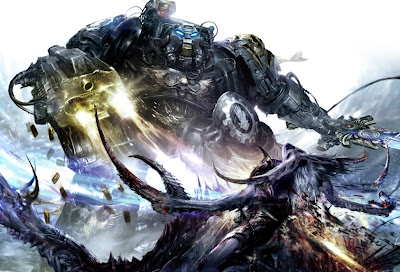 Last weekend, I had played a Chaos Daemon player roll three ones to assault through cover. He was able in the movement phase to be one inch away, so I assumed it did not matter what he rolled. However, he claimed he did not make it. I told him, you were one inch away, but he said the rules claim you must be outside one inch. I did not look it up and took his word that he failed to assault. The exact opposite occured in a later game. Either way, I really did not know, and always assumed you can be at one inch. Lets take a look at this rule.

Rules of Our Game was a weekly post regarding rules problems that I have not done for about two months. I am getting back to it. I run across tons of rules questions each week, and I think almost every person in our hobby should keep an eye out for things like these. It helps us when we finally come across such problems or weak spots in the rules of the game. Comments and "Your Wrong!" are very appreciated with this series, as navigating the rules of our game can be quite treacherous.

I was told that there are two intrepations for this rule, and I for one do not beleive it. So here is what the rule says.....

a model may not move within 1" of an enemy model unless assaulting.

Within seems to be the defining issue. So we had better define the word.

adverb
1. in or into the interior or inner part; inside.
2. in or into a house, building, etc.; indoors: The fire was burning on the hearth within.
3. on, or as regards, the inside; internally.
4. inside an enclosed place, area, room, etc.: He was startled by a cry from within.

We know that there are other movement definitions in the game that use "more than 12", like infiltration and scout.

So the question remains, can you be sitting at 1" or must you be outside that 1"? Either way, I have always given it to someone that only rolls 1" to assault if they were that close.

I do think that for a distance, according to the rule, that you must be outside of 1" after reading this, so that it is possible to fail an assault with a bad roll, but like I said, I am open to it either way. What is your take?
1/26/2012
Natfka
Rules of Our Game